Jonathan Pollard: "We must change our mentality. We fear G-d alone, no one else.”

In the Oz veGaon Nature Preserve in Gush Etzion south of Jerusalem, the third Sovereignty Youth conference, entitled “My Land,” opened on Thursday.

In it, the initiative to expand the municipal borders of Jerusalem was launched, the “Greater Jerusalem” initiative, which seeks to transform Jerusalem into a metropolis that will include Mevaseret Zion, Gush Etzion, Maale Adumim, and some of the communities in the Binyamin region. 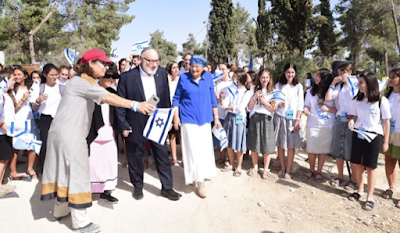 The event began with a reception of the hundreds of youths participating in the conference, who arrived from throughout the country, in honor of Jonathan and Esther Pollard, who were honored with the planting of a tree in the preserve accompanied by the singing of “The children will return to their borders” (Jeremiah 31:16).

The conference itself opened with the speech of the head of the Gush Etzion Regional Council, Shlomo Ne’eman, who recounted to Pollard his own past as one who grew up in a country of Prisoners of Zion.

He addressed the young men and women participating in the conference: “The mission of Sovereignty is the value of the rule of the people over its land and removal of all question marks regarding the future of our land. Not to ask how or when and under which government, because you, the youth, will be the future government. Here the ministers of the future are sitting, you, who are devoted to the mission in order to realize it and emerge victorious.”

Jonathan Pollard addressed the conference, and thanked the heads of the Sovereignty Movement, Yehudit Katsover and Nadia Matar for their activity.

He addressed the issue of sovereignty and Jerusalem’s significance for the Jewish people. “For thousands of years there has been no question why we are here. The answer is: Because we received this land from G-d, not from the United States, not from the British, not from the United Nations, but from G-d. There is no need for us to explain our belief that this land is ours. No one will tell us where to live. The days of the ghetto have ended. We are a free Jewish people. The American President will not tell us where we are permitted to live and where we are prohibited to live.”

Pollard raised the matter of the Dance of the Flags: “They do not want Jews marching to the Western Wall; where will it end? Our security officials have no problem seeing Arabs with Palestinian flags on the Temple Mount. Think about it; the Temple Mount. And that is OK? They are in our capital with Hamas flags. We must change our mentality. We fear G-d alone, no one else.”

“In the next government we have a new Prime Minister, Naftali Bennett. I am certain that it is a surprise for him as well as for those who voted for him. He must take action to defend our honor in the future,” Pollard said, and called to protest and demand from the government ministers to restore Israeli control over the four communities that were uprooted in northern Samaria in 2005.

He also called for construction in all the territories of Area C, which we can demand from the new government. “We must be conscious of the need to expand Jerusalem, because we are not concerned only with Jerusalem flourishing. Our objective is to ensure a Jewish majority and to prevent the isolation of the city. The objective of the Biden Administration is to isolate Jerusalem. Do not let their calming statements convince you. They are not our friends.”

The heads of the Sovereignty Movement, Yehudit Katsover and Nadia Matar, told of the special women’s prayer that took place approximately ten years ago with Esther Pollard in the Cave of Machpela, a prayer that was composed especially on behalf of Jonathan Pollard. At its conclusion, Katsover and Matar promised Esther that when her husband arrives in Israel they would hold a special reception in his honor. They have fulfilled that promise of theirs with the special reception of the Sovereignty Youth.

The two emphasized the importance of expanding the borders of Jerusalem in all directions in order to make clear to the people in Israel and to the entire world the centrality of the city in the life of the Jewish people, especially in light of the threats to Israel’s wellbeing under the pretext of Arab defense of Jerusalem.