When the British evacuated the Jews from Silwan (UPDATE)

Buried in a New York Times article about the claims of both Jews and Arabs to houses in Silwan we see this:

In the late 1930s, the site was abandoned. Documents show the British authorities, which then ruled Palestine, evacuated the Jewish residents, fearing they were vulnerable to an Arab insurrection. After the British left and Jordan occupied the West Bank in 1948, Palestinian families moved onto the uninhabited plot.That is a sanitized way of saying that the Jews were constantly attacked by Arabs in Silwan.

Here is the Palestine Post article about their evacuation, from August 15, 1938: 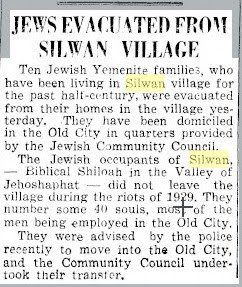 The British authorities were supposed to protect the homes. They didn't - Arabs broke into a synagogue and defiled the Torah there several months later: 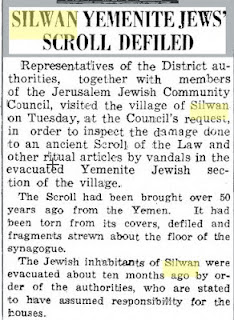 UPDATE: Here is the letter from British officials about the evacuation - and the expectation that the Jews would return shortly. (h/t Stephen)  Visit:  https://elderofziyon.blogspot.com/2021/06/when-british-evacuated-jews-from-silwan.html

To hear even more detailed dates and attacks by the arabs on their co-existence neighbors, the Jews, listen to Rav Richter in the first half of this video:  Rav Richter: Israel Hamas War (part 2) https://www.youtube.com/watch?v=AjnhFotZrXE&t=3270s

Well, surely it should be understood that the pereadam would be emboldened by the radical leftists, socialist (which are fascists) and will feel free to freely murder Jews, c'v, in our holy Land that is supposed to be a JEWISH STATE. By all normal thinking human beings this should mean that no one but a Jew can serve in its government, in its courts, etc. The whole government has been proven to be sell outs to the non Jewish world and woe unto them when H' deems it the right time for Him to unleash His Anger. May He protect all the real Jewish neshamot and as long as the Jews remain silent and acquiesce to all this garbage, it will continue, c'v, until Moshiach shows up.
The world cannot abide that the Jews have returned home and they will do anything to keep the Jews out of EY, just as the antisemitic British did before Israel became the 'state' by aiding the Arabs to slaughter whenever they had the chance. Anyone who knows even a little history should know that. Every inch of the Land of Israel belongs only to the Jewish and no other, no matter what. It was given by the Creator Himself to His children, Israel. The day will soon come when the world will beg the Jewish people and G-D for forgiveness. Of course, there will be worthy ones and many who are not worthy of any forgiveness, as we can now see what is happening in the world. Hashem Yerachem al Amo Yisrael,the Bnai Yisrael! Amen!