Dangerous Volcanoes in the Pacific Northwest and all of America

Yellowstone, this is the volcano that I thought was the most dangerous in the States, and think about it when we read about all the volcanoes erupting all over the world. However, there are two more. No there are many more in the Pacific Northwest!

Mt S. Helens and Mt Rainier, and the group of volcanoes that form the Cascade Range.

"Mount St. Helens is 34 miles (55 km) west of Mount Adams, in the western part of the Cascade Range. These "sister and brother" volcanic mountains are approximately 50 miles (80 km) from Mount Rainier, the highest of Cascade volcanoes. Mount Hood, the nearest major volcanic peak in Oregon, is 60 miles (100 km) southeast of Mount St. Helens." Also, ""Mount St. Helens is an active stratovolcano located in Skamania County, Washington, in the Pacific Northwest region of the United States. It is 96 miles south of Seattle, Washington, and 50 miles northeast of Portland, Oregon."

"Mount Rainier (...) is the highest mountain of the Cascade Range of the Pacific Northwest, and the highest mountain in the state of Washington. It is a large active stratovolcano located 54 miles (87 km) southeast of Seattle. It is the most topographically prominent mountain in the contiguous United States and the Cascade Volcanic Arc, with a summit elevation of 14,411 ft (4,392 m). Mt. Rainier is considered one of the most dangerous volcanoes in the world, and it is on the Decade Volcano list."

What Would Happen If Mt. Rainier Erupted? "Most people don’t even know what “lahars” are, but they can be exceedingly deadly. Just imagine a tsunami of super-heated mud that is hundreds of feet thick traveling at highway speeds. In fact, scientists believe that Mount Rainier is capable of producing massive lahars that could move at speeds of up to 50 miles per hour…" Read more here. 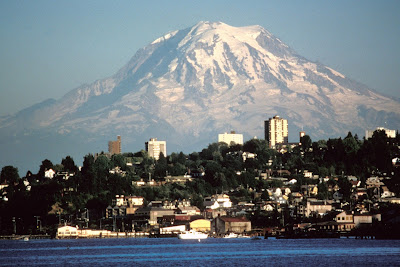 List of currently OTHER active Volcanoes in the rest of the world.

Mrs Sasson was released from the hospital

"Mrs. Sassoon was brought to her mother-in-law’s on Erev Shabbos Parshas Chukas. Reb Gavriel, while discussing his wife’s strength and perseverance, told the Israeli Kol Berama station that she will continue receiving treatment at home, where she will be convalescing.

The Sassoon home on Bedford Avenue remains destroyed and uninhabitable.

Reb Gavriel, continuing to inspire with his outstanding faith and fortitude, said that with each day, he actually feels that he is “becoming stronger” and that the joy and memorable moments that he and his wife spent with their precious children keep them going and give them both chizuk.

“This world is a temporal one,” he said. “We are thus waiting for the time when we and our children will all be united once again.”

All are asked to continue davening for Gila bas Frances and Tziporah bas Gila."

So happy to report the above, as was reported in Matzav.com and Yeshivaworld.com along with uplifting words by R' Sasson. AND of course at Yaak's blog
at June 29, 2015 No comments:

Why Not Revoke Her "Purported" Conversion!


Why doesn't the Chief Rabbinate revoke the conversion of Anne Ayalon, who works eagerly for disseminating Christianity in Eretz Yisrael. Is she living up to Orthodox principles? Is she Jewish in any sense of the essence of Judaism? Does she KEEP the halachot? (While other converts are revoked for wearing pants or other minor 'offenses')


"Anne Ayalon, founder and president of the Galilean Resort project, appeared on the Christian TV program "In the Last Days" (2013) where she encourages a Christian attachment to the land of Israel and places a theological emphasis on Jews and Christians coming together. Ayalon, a purported convert to Judaism and the wife of Israeli politician Danny Ayalon, states (...) that she personally doesn't see a lot of difference between Christianity and Judaism." Jewish Israel


Embarrasing Statements by Danny Ayalon "Ayalon was talking about the advantages of allowing Christian prayer in Kever David, KIng David's Tomb, which the Christians claim as being the site of the "Last Supper."" This statement was made on Israeli TV this Motzei Shabbat (in link).


What really happened to John Kerry?

When will we find out the truth?

Jewish Children Do NOT Need to Learn Arabic!

Jewish Children do NOT need to learn Arabic.

Jewish Children NEED to learn Jewish History, going all the way back to when Moses led our ancestors out of Mitzrayim. Especially, each of the times we were expelled from Eretz Yisrael and banished into other nations.

And then, and only then, how some of us went to a tiny malaria infested area in the Middle East, dug swamps, and laid the cornerstone for Jewish settlement in Israel and created several settlements - Rishon LeZion, Rosh Pinna, Zikhron Ya'akov, Gedera (a total of 28 moshavot). Those "some of us" were pioneering religious  Jews from Yemen and Eastern Europe, who came in the 1880s.

The history so far encompasses thousands of years.

After all this, and only after all this, the socialists arrived to establish a secular state, ignoring the long history previous to their venture. That state is the Israel of today. And most Israelis, once children of this new venture, are totally ignorant of our people's journey of Jewish history.

B"H We, the remaining descendants, are returning from the nations we have spent too many years living in, to our inheritance from G-d, who gave this land to Avraham, Yitzhak, and Yisrael's future generations.

We have much to teach the Jewish Children of our inheritance and their responsibilities, and Arabic is NOT necessary. Arabic is the language of those who refuse to accept our being, our history, and our return to our homeland. It has become a language of hate and destruction.


And today, along comes a vocally brazen member of Likud and 'in your face' says:

"There is a long list of laws that I intend to promote," (...) stated on Army Radio, The initiatives include, "among other things, learning Arabic from first grade, restricting the age for drinking energy drinks and [..] and changing the Planning and Construction Law."

I think he is terribly misguided, loud and politically obnoxious, and needs to benefit from a return to kindergarten, to start learning the real history of Jews and what is really important for us.