Satmar is finally coming together in an act of achdus:

"Both Satmar Rebbes, Rav Zalman Leib Teitlebaum, Shlita of Williamsburg and Rav Aaron Teitlebaum, Shlita of Kiryas Yoel have already confirmed they are willing to appear on a podium at one-another’s side" in a protest against the Jews in Eretz Yisrael [According to a Kikar Shabbat report]

However, for the sake of true Achdus:

Chassidim of the Kiryas Joel Satmar Rebbe Rabbi Aharon Teitelbaum attacked and beat up a photographer who is a hasid of the Williamsburg Satmar Rebbe Zalman Leib Teitelbaum at a wedding yesterday in the Ateres Golda hall in Borough Park, Brooklyn.

And the name of top Hindu cast is derived from Abraham – Brahmins! (See Berashis 25:1, and Rashi states that Ketura is Hagar.)

Hinduism is literally the tumah that Sarah had sent away!


When I read this I thought about Tomer Devorah's post: The Forces of Nature Will Intensify forewarned. And now the American mid-West is under deluge from Tornadoes: 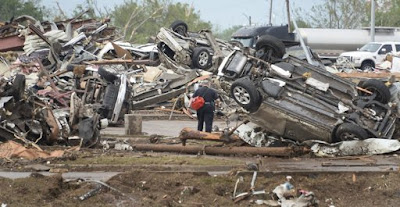 'Our hearts are broken for the parents': Seven children found drowned in school amid fears 24 more classmates have perished after tornado pulverizes Oklahoma City suburb killing at least 91 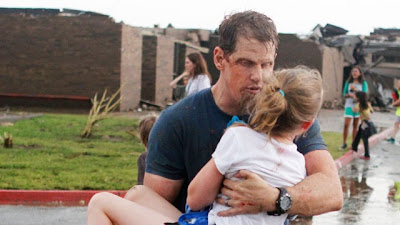 More pictures at VosIzNeias. Good Grief, it looks like the Fukushima aftermath: 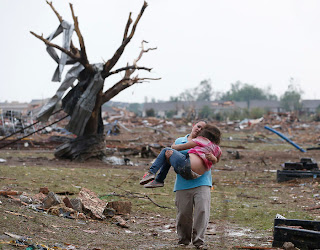 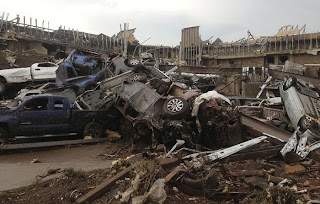 I don't know how much of the following is verbatim, but here is a Jewish Press rendition, written by Tzvi Ben Gedalyahu, of what Yair Lapid said:


Yair Lapid, Israel’s Finance Minister and head of Israel’s second largest political party, has unraveled U.S. Secretary of State John Kerry’s efforts to reincarnate the “peace process” before Kerry even packed his bags for another trip to Israel at the end of the week.

He told the Yediot Acharonot newspaper Sunday what everyone except Kerry and the European Union’s Catherine Ashton know – it is unrealistic even to think about a final stage peace agreement for the establishment of the Palestinian Authority as an independent country.

It is questionable if even Kerry’s boss, President Barack Obama, actually thinks an agreement is in the cards.

Maybe, just maybe, Obama has learned what Ronald Regan, Bill Clinton, and George W. Bush never seemed to grasp – the Palestinian Authority will make peace with Israel only when it is sure that the Jewish state’s future is doomed.

That is why PA Chairman Mahmoud Abbas refuses to budge on the Arab world’s dream to import several million Arabs to Israel, based on their claim that Israel is their home because their parents, grandparents, great-great parents and their dogs lived here.

The Oslo Accords, Clinton’s time bomb that fulfilled his promise to create a new Middle East, although not exactly the way he envisioned, provided for interim borders for a Palestinian Authority state, with final borders to be negotiated.

Bush’s Secretary of State Condoleezza Rice, in one of her many less enlightened moments, agreed that maybe it was best to simply skip over that little clause and go for broke.

And the “peace process’ since then indeed went broke.

Correctly perceiving that there was no need to concede anything except uncertainty, Abbas re-defined the word “negotiations” to mean “you give and I take,” with the only undecided issue being the date that Israel will supposedly sign its own death certificate.

The term “interim agreement” is no where in his lexicon. It is buried deep, deep under the “peace process,” and here comes Lapid, the last hope for the center-left to keep those pesky national religious Jews from getting too uppity, to the rescue of the right wing nationalists.

He also displayed remarkable honesty and lack of tact at the same by stating that Abbas “is still not psychologically ready for an agreement with Israel, either partial or full.”

Lapid is part of an overwhelming majority of Israeli Jews who are not willing to hand over such areas as the Old City on Jerusalem to Abbas.

Abbas could save himself from virtually isolation by the Obama administration if he accepts the idea of interim borders, but to do so would be political suicide, if not a sign of a real-life death wish.

The joker in the cards is Lapid’s statement Sunday that President Obama could set a three-year time limit for defining final borders while carrying out Bush’s written promise to Israel that such as areas as Gush Etzion and Maaleh Adumim would remain part of Israel.

He also wants to put aside the issues of Jerusalem and the Arab demand for importing millions of foreign Arabs into Israel. Abbas has rejected that idea time and time again.

It’s too late for that.

Abbas has outsmarted himself into a tight corner, and Lapid’s incredible blindness to reality is just what the right-wing camp needs.

Every time Abbas say “no,” the closer Israel gets to saying “yes” to declaring sovereignty over Jewish population centers in Judea and Samaria.

Lapid also seems to have forgotten one little item in his sophomoric ideas of peace: Gaza. That is that little piece of God-forsaken land that Egypt was thrilled to be rid of in the Six-Day War in 1967. Without an agreement between Abbas and Hamas, Kerry can forget about his Mission Impossible,

The same is true if Abbas and Hamas ever do reunite, because that would mean the vowed acceptance of terror, although Abbas could get around that by calling it “resistance.”

Lapid to NYT: Settlers will likely be uprooted WHY, LAPID, WHY?

A ZIONIST IS A SETTLER, ALL ISRAELIS ARE SETTLERS, WE ALL CAME FROM OTHER COUNTRIES ... TO COME HOME. THIS IS WHAT A ZIONIST IS, A RESIDENT OF OUR HOMELAND, NOT SOMEONE WHO GIVES AWAY OUR LAND!

OK, PM Netanyahu,
you have been stating all over the place that you would do anything to safeguard our lives ... So how can you allow this Nazi flag to fly over Hebron, the burial place of our Ancestors, the Holy Avraham and Sarah, Yitzchak and Rivka, Yaakov and Leah?

We are a Nation that has endured endless oppression and murder from various peoples, how can you allow this?

We are a National Quilt of Patches of Jews from various countries, remnants and survivors from one of the worst devastations brought upon us by the Nazis ... how can you allow this flag to fly?

“I swear that if we had a nuke, we’d have used it this very morning,” vowed Jibril Rajoub during an interview with the Lebanese Al-Mayadeen TV channel, as reported by the Palestinian Media Watch (PMW)" Matzav


How disgusting, and the nations of the world keep dancing with the Satan on earth. I have no patience for these people and am waiting anxiously for Moshiach to arrive and fight our wars.
at May 09, 2013 2 comments:

There was a vivid discussion in the Knesset on the rights of Jews to pray on the Temple Mount. "Rian Kamal, the head of the Alaqsa Fund, which raises money for services, facilities, and other projects for Muslim worshippers on the Temple Mount, spoke at the Knesset hearing on demands by Jewish groups that Jews be allowed to ascend the Mount and pray openly."

“Why does it bother you that Jews would pray on the Mount?


Muslim Official:
We'll Give Up Temple Mount When Messiah Comes

“We cannot tolerate this racist discrimination. It is unthinkable that I would have to stand at the entrance to the Mount and seek entry, only to be denied it because I am a Jew. This is contrary to the very nature of the State of Israel,”

According to the Foreign Ministry, any change in the status quo on the Mount would likely cause an international incident that would put Israel in a very poor light

Correction, not a "poor light" but a Holy Light!

Let there be an international incident ... Then state clearly and in no uncertain terms ... That the Temple Mount belongs to all the Jews and they are back on their land to maintain stewardship of the Temple Mount that King Solomon built with the plans of his father, King David. The Holy Five Books of Moses declares that HaShem, the Creator and Ruler of the entire world gave Eretz Yisrael to the Jews as an inheritance from the days of Avraham Avinu, passed down through his sons Yitzchak and Yaakov, and to their descendants who are living in Israel today.

The Koran says so and the Arabs know so.
The time has come for the rebuilding to begin!

The fact that this Muslim mentioned Moshiach in connection with the Temple Mount, and its online for all to read  could be a sign of things to be. I doubt he believes in the Moshiach that we believe in.  But, maybe if we began praying for Moshiach on the Temple Mount, it might get things moving.

*Back in Mitzrayim, Pharoah demanded that they kill every male child.  Shifra and Puah – Hebrew midwives employed a crafty tactic in defiance of Pharoah. We now have a "Puah" in the government,  we need a "Shifra" to once again thwart the Pharoahs of today that wish us to disappear.
at May 08, 2013 2 comments:

"PM Golda Meir, Defense Minister Moshe Dayan and their generals miserably misread the map and also said there would be no war."

"From the north, evil shall be released on all the residents of the Land (Israel)" - Jeremiah 1:14

Why does the above passage use the passive form, "shall be released"?

The Answer to this Question can be found at
Lazer Beams' Emuna News Analysis.

However, one thing is troubling: Reb Lazer writes, "Throughout the Torah, HaShem warns us that a breach in Torah study and observance will bring about a breach in peace and security, as we see happening now." This brought to mind the parable of the "chicken and the egg," which came first? The 'breach' or the 'change in government'?

It's Not About Land ... Stupid 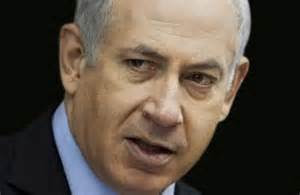 PM Netanyahu:  Conflict is Over Israel’s Existence, Not Land
PA Chairman Mahmoud Abbas Abu Mazen: the PA will not recognize Israel as the Jewish state.

What a farcical charade the Saudis and Americans are perpetrating on the Jews
at May 01, 2013 2 comments: