Hundreds of right-wing demonstrators gather in the capital to protest Bennett-Lapid government and its reliance on United Arab List. 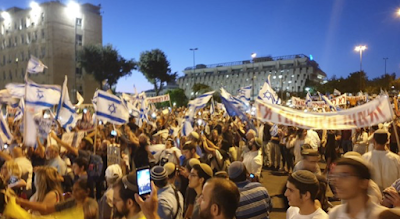 Hundreds of rightist protesters gathered in Jerusalem Thursday evening to rally against the incoming national unity government, condemning the new coalition for its reliance on the United Arab List (Ra'am) and left-wing parties.

Under the banner "No To A Left-Wing Government", the demonstration is being held near the Knesset building to protest the planned vote on and inauguration of the incoming government in the Knesset plenum this coming Sunday.

"We came here to prevent division within the people of Israel," said Rabbi Yehuda Ben-Yishai, the father of Ruth Fogel, one of the victims of the 2011 Itamar Massacre, carried out by a pair of Arab terrorists.

"Our enemies have a clear goal to divide the people of Israel. They are using pretty words to infiltrate and to get into the pure hearts of Israel.”

The new government, which is set to be led by Prime Minister-designate Naftali Bennett (Yamina) for the first two years, is expected to be voted in and sworn in at 4:00 p.m. Sunday, during a special session of Knesset.