She Saved The Girl’s Life Only to Discover Later That it Was Her Sister.

Sunday, 6:37 AM:  Sara Goodman checked the time once again, mindlessly drumming her fingers on the console. 6:37 AM. She saw the long line of cars in front of her. Was there some kind of accident? She was definitely going to be late to work.

Miri’s head felt heavy. Her entire world exploded with agony. Pain blinded all thought, removed her from all reality. Where was she? Who was screaming? She looked down, and saw a growing pool of blood. Then, everything went black.

Sara hung up with her boss and sat in the car, staring into space. She could hear the wail of sirens growing closer. It must have been an accident. She might as well daven for whoever was in the accident. It couldn’t hurt. She reached into her bag and pulled out her fraying tehillim.

Miri was floating. She felt lighter than ever. She was high up, looking down at an overturned car. Miri recognized her own motionless body down there slumped on a stretcher, swimming in a pool of blood. Tiny black dots were gracefully swirling around her body. As they began to float up, she started to make out what they were. They were hundreds of words of tehillim.

Miri gasped, taking a glorious gulp of air. She was on a stretcher, surrounded by EMT’s who stared at her in utter shock. “She came back to life!” one of them shouted.

When Sara’s sister called her later that day to tell her that she survived a terrible accident, she was in shock. But when she heard the strange story how the letters of Tehilim brought her back to life, Sara broke down in sobs. It was then that she realized her tehillim saved her sister’s life.

Tehillim has gotten us through the good times and the hard times as a nation. Right now, there is an incredible opportunity to receive a tehillim with a signed bracha from Rav Chaim Kanievsky. Those who donate to help sick families in Israel will receive a Sefer Tehillim with an inscription of his powerful bracha: 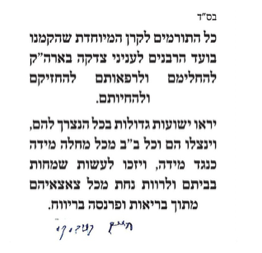 This special opportunity to own a tehillim with Rav Chaim’s blessing and signature proclaims that you are partners with him in giving tzedakah to help the cholim of Eretz Yisroel. Click here to order this one-of-a-kind Tehilim. So when you say your Tehilim, you'll be saying it with the gadol hador.