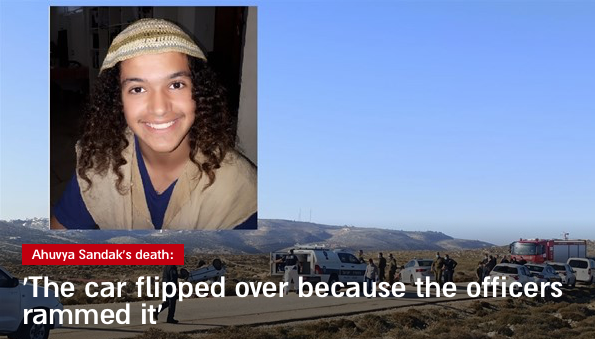 Protests over the death of Ahuvya Sandak continued throughout the country on Sunday evening, two weeks after the police chase during which the 16-year-old teen was killed.

About 100 activists and friends of Ahuvya demonstrated at the Chords Bridge in Jerusalem. The demonstrators blocked the entry road to Jerusalem from time to time. Police at the scene moved the protesters to the sidewalk.

Was this revealed in the initial report?

"police closed off the area for six hours, letting his body lay in the open.”

Dozens of people demonstrated at the Shiloh junction and some even confronted police. During the clashes, a 14-year-old boy was arrested and a lawyer from the Honenu legal aid organization assisted him.

Demonstrations were also held in Kiryat Malachi, Kedumim Junction, Yitzhar Junction, Ma'ale Adumim and other places around the country, with the participation of hundreds of people.

Rabbi Daniel Cohen, the Rabbi of Bat Ayin where the Sandak family lives, urged the public to donate towards the establishment of a synagogue in honor of Ahuvya Sandak.

"In deep sorrow and pain for Ahuvya, but also with joy for doing good, we are working to build a synagogue in the place where Ahuvya devoted his life. To add holiness, prayers, to add a place like any other settlement deserves. A synagogue in which we will pray together.”

Rabbi Cohen finished by saying to the public: "Let us donate together for God's sake."

He added, "we will all miss Ahuvya, a very dedicated sweet boy. He was devoted to Maoz Esther, to Torah learning, herding and settling the land. We are all in deep sorrow over Ahuvya's loss.”

H' yikom damo! The tragedy that Israel (the 'Jewish' state) has a police force that hates Jews is so oxymoronic and pure evil. May H' have mercy and bring us our true leaders, those who descend from our holy ancestors and have the love and fear of Heaven!