From Missiles and Miracles . . . From Prophecy to Reality

Message from Rav Sternbuch shlit”a for our Days
2020 is much sooner than the Missiles of 2014
which brings us to:
From Missiles to Drones, from Commandos to A1, from the quiet of Deep Space to
Pillars of Fire and Illuminating Sparks of Miracles

Are We Living in a Star Wars Age?
SPACEX AND STARLINK
[. . .] Air Force acquisition chief William Roper told reporters at the Pentagon that the Air Force and SpaceX will conduct an event on April 8, together with other branches of the U.S. military, that will see SpaceX Starlink satellites link up with multiple armed forces systems in a “massive” live fire exercise. "SpaceX has been a great industry partner for us," Roper said. "They are very excited and we are excited to learn more about their satellites through the demonstration.” 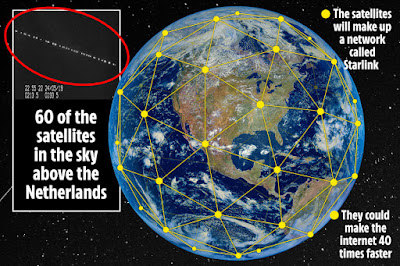 The Air Force And SpaceX Are Teaming Up
For A 'Massive' Live Fire Exercise
The demonstration will reportedly involve shooting down a drone and a cruise missile and will take place at several different sites including Marine Corps Air Station Yuma in Arizona to Eglin Air Force Base in Florida. The massive tests will also include ground forces, submarines, ships, and a variety of space-based assets. the drive

ORLANDO, Fla., — Tesla and SpaceX CEO Elon Musk predicted Friday that the future of war would be carried out by autonomous drones and not by legacy aircraft. CNBC “The fighter jet era has passed,” Musk said during a fireside chat with U.S. Air Force Lt. Gen. John Thompson at the Air Warfare Symposium in Orlando, Florida. “Drone warfare is where the future will be. It’s not that I want the future to be – it’s just, this is what the future will be,”  . . .

“The competitor to the F-35 should be a drone”

WILL WE ONE DAY WITNESS A “War in the Stars” OF THE 70 NATIONS FIGHTING ONE ANOTHER IN SPACE WITH WEAPONS
REMINISCENT OF STAR WARS?
Is all this a precursor to that Great and Awesome Day of the L-rd

Balak 212b
We have learned that in the future the Holy One will rebuild Yerushalyim and show one steady star, flashing with 70 pillars of fire, and with 70 sparks which illuminate (receive light) from it in the middle of the sky. There will be 70 other stars which are commanded and controlled from it, and they will illuminate and flame in the sky for 70 days.

On the 6th day, the 25th day of the 6th month, the star will appear. It will be gathered on the 7th day, at the end of 70 days. On the first day it will be seen in the city of Rome. On the same day, 3 supernal walls of that city of Rome will fall and a great heichal will fall. The ruler of that city will die. Then the star will spread out to be seen in the world. In that time strong wars [among the goyim] will awaken in the world on all 4 sides and Emunah will not be found among them.

On the day that the star will be concealed, the Holy Land will quake 45 miles around the place of the Bais Hamikdash, and one cave under the ground will be revealed. From this cave will come out a strong fire to burn the world. From this cave a supernal branch will grow and it will rule over the whole world, and to it will be given the malchus. The supernal holy ones will gather to it. Then Moshiach will be revealed in the entire world and malchus will be given to him.

I think the blue star is coming and they want to be ready. May be, but I'm very excited thank you. leah