THE DEAREST OF ALL KORBANOS

THE DEAREST OF ALL KORBANOS
By Roy S. Neuberger

We have entered the days of our Redemption, Chodesh Adar, when the earth becomes warm, the sap begins to flow and brilliant flowers appear. This is the time of greatest hope. Even though we are beset with danger, we are also filled with hope.

My friends, it is important to keep in mind that redemption comes precisely when we are released from danger. DuringPurim, we were saved from Haman; during Pesach we were freed from Mitzraim.

In this Parsha, we plunge suddenly into the darkness of the eigel. How will we be saved?

“Among all the sacrifices that were offered in the Holy Temple, none was as precious before G-d [as ketores] …. The incense… was an enlightened remedy to purify people from sin. Whoever smelled the fragrance of the incense … would have thoughts of repentance. His heart would be purified of all evil thoughts and from the defilement of the Evil Inclination…. The incense had the power to break and subjugate the power of the Evil Inclination… In the time of plague there is no remedy better than the ketores. This was a gift that the Angel of Death gave Moses when he went on High to receive the Torah.” (Yalkut Meam Loez)

Rashi says ketores is “the dearest of all the korbanos!” (Bamidbar 16:6)

Chazal tell us “[Moshiach] sniffs and judges,” (Sanhedrin 93b), meaning that he will have the power to judge innocence and guilt through a highly refined ability to “smell” the truth.

I want to suggest that the sense of smell is the most “innocent” of all the senses. We are warned in the Shema not to follow our eyes, which easily lead into sin. Touch and taste are also very dangerous. But smell …? Granted that the perfume makers want to allure us, but I would say that smell is somehow less dangerous than other senses. Why?

My friends, every Motzae Shabbos we inhale the aroma of besamim, which reminds us of our neshoma, because Hashem “blew into [man’s] nostrils the breath of life.” (Beraishes 2:7) The organ of smell is the passageway for life itself.

Our Father Avraham found Ma’aras Hamachpaila because he followed the scent of Gan Eden which emanated from there. (Pirkei D’Rebbe Eliezer 36)

My friend who lives in California grew up in a Manhattan apartment building. Recently, he wanted to show his wife the place of his childhood. So, after some fifty years, he returned to that venerable building. There was the old-fashioned elevator with an elevator operator. As he entered the elevator, suddenly old memories flooded back. He was a child again! What happened? He had inhaled the aroma emanating from the wood of that old elevator!

Aroma is powerful. We have to try to sense the aroma of Gan Eden in this polluted world. We have to know that purity is attainable, and we can find its source just as Avraham Avinu found Ma’aras Hamachpaila in a world polluted with avoda zara. This pure aroma can save us, just as the ketores saves from death. One who desires to return to Gan Edenwill not be overwhelmed by tumah.

May we all inhale the pure aroma of the ketores, when Hashem rebuilds the Bais Hamikdosh soon in our days! 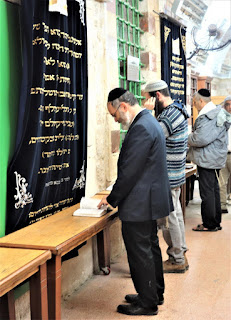