Vayakhel Pekudei – THE FUTURE OF THE WORLD

In These Turbulent Times
By Roy S. Neuberger

I am the father of a new book.

It’s not such a joke. One puts one’s whole self into a book, one’s emotions and hopes. Labor pains accompany its birth, followed by intense effort in rearing it and sending it out into the world. One hopes for nachas, that one’s “offspring” will benefit the world, and – most of all – that it will be pleasing in the eyes of the Ribono shel Olam!

The name of this book is “Hold On: Surviving the Days Before Moshiach.”

I am blessed with a wonderful publisher, Mosaica Press, headed by two choshuve rabbonim – Rabbis Yaakov Haber and Doron Kornbluth –who now reside in Israel and take great pride in the painstaking process of producing beautiful and meaningful books.

The title is based on words of the Chofetz Chaim (which I first saw in an article in the Yated Ne’eman): “Before Moshiach comes, Hashem will stretch a rope from one end of the world to the other and shake it vigorously. Those who hold on tightly will survive. Those who let go, won’t. These turbulent times are testing us in our faith in Hashem. We must hold on tightly until the end.”

It is wondrous to me that the book is appearing at this season. It is a book about Redemption, and it all hinges on the amazing resemblance between the events of Mitzraim and the events to be expected in the forthcoming Geula Shelaimah.

My friends, I am deeply concerned about the immediate future, and “deeply concerned” is an understatement. Needless to say, countless others – Jews and non-Jews – around the world are also deeply concerned. Current events seem to be hurtling beyond the control of any person or government, and everyone instantly sees every crisis in every corner of the globe on their screen as soon as it occurs, so the worldwide panic level is shooting upwards.

The list of worries is endless, but there is a source of hope.

Chazal tell us, “If you see a generation upon which numerous troubles come like a river, expect [Moshiach].” (Sanhedrin 98a)

The question is: how can one survive, spiritually or physically, into the days of Moshiach?

“Rabbi Elazar was asked by his students: What can a person do to be spared the travails of Moshiach? [And he responded], ‘One should occupy himself in [the study of] Torah and in acts of kindness.’” (ibid 98b)

My book is about surviving the days before Moshiach.

“Hold On” is expected in bookstores before Pesach.

With brachas for the speedy arrival of the Geulah Shelemah! 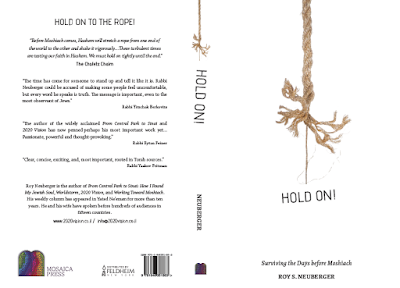