UNITY Government? – NO, ITS A LEFTIST GOVERNMENT!

We are now being *preached to by the PM. Netanyahu, after saying, "Those who don’t comply are endangering not only the public, but themselves as well.” then he says "Those Defying Health Restrictions Violate Two Biblical Commandments”

You shall not take vengeance or bear a grudge against your countrymen.
Love your fellow as yourself: I am Hashem.
(Leviticus 19:18)

Netanyahu added that it violates another Biblical prohibition of “do not stand idly by your fellow’s blood” [could it get any crazier?]

Do not deal basely with your countrymen.
Do not profit by the blood of your fellow: I am Hashem.
(Leviticus 19:16)

“See, I place the land at your disposal. Go, take possession of the land that Hashem swore to your fathers, Avraham, Yitzchak, and Yaakov, to assign to them and to their heirs after them.” Deuteronomy 1:8
The Regavim Movement is deeply concerned by the agreements that are being formulated between the Likud, Blue and White, and Labor, which include the repeal of the Kaminitz Law, placing the Bedouin Authority in the Labor Party’s hands, and setting aside the commitment by Netanyahu and the Likud to extend Israeli sovereignty in Judea and Samaria. Regavim’s spokesperson explained: “An emergency government that abandons Zionist values presents a clear and imminent danger to the Land of Israel and to the preservation of Israel’s national land resources.” 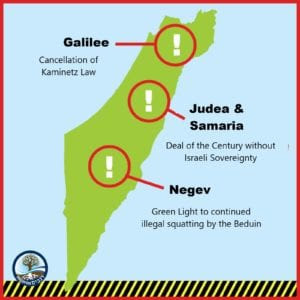 “In the Galilee – repealing the Kaminitz Law equals a seal of approval for the epidemic of illegal construction that is swallowing up the open spaces that are vital to Israel’s development.”

“In the Negev – handing the responsibility for the Bedouin Authority to the radical left equals green-lighting the continued rampage of illegal Bedouin land seizure throughout southern Israel.”

“Let’s call a spade a spade: This isn’t a unity government, it’s a leftist government.”


*Netanyahu believes he is in control and it is his directives that are accomplishing the best, as the US has stated, approach to this virus, but we know it is HKB”H Who is in control!


Don't we know the Leftist ideology on religion,
on Haredim, on HKB”H?

Immediately after the traitor Nethanyahu has agreed to take all these leftists traitors from the Ganz gang into his government - immediately on the next day it was announced that Nethanyahu himself has to go into quarantine because he may have been infected by the Coronavirus ! And possible the evil Ganz is infected as well ! Can you see here Midda-Keneged-Midda, Measure-for-Measure ?!
David

Interestingly, read on another blog, that this might be the time when Jerusalem goes up against Yehudah because they wlll join our enemies! We have to put our total faith & trust in H' that HE will perform miracles for us in this month of miracles, Nissan, where the leftist erev rav amaleikim wlll be vanquished.


Made a mistake and reversed the words; it should read when Yehudah goes up against Yerushalayim, whose leadership are the Erev Rav.