Every election year has a Disease:

Rav Meir Turnheim, a Chabbad chassid who lives in Lod has successfully predicted the results of past political elections in Israel and throughout the world with great accuracy, basing his predictions on a specific complex method of singling out letters from one passuk in the parsha read in the week of the elections in the section read on the day of the elections. At times, his predictions were proven true despite the fact that all other predictions and polls predicted otherwise.

According to his predictions for the Israeli elections on Monday, Rav Turnheim claims that based on his method, Prime Minister Binyamin Netanyahu will win the elections, as his name is mentioned ten times in the parsha (Parshas Tzevah) and Gantz’s name is not even mentioned once.

“I predict he [Netanyahu] will win,” said Rav Turnheim. “He was mentioned only once [in the previous elections] and this time he’s mentioned ten times.” YWN 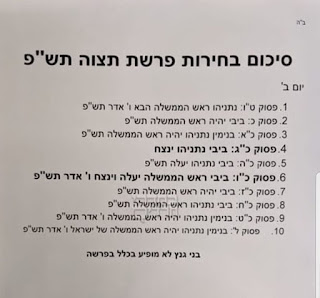 “ […] based on Gemorrah Sanhedrin 98a, the third election will ALSO result in no Govt.
It is supposed to fail one last time so that when Mashiach takes over, it is because the entire existing system has a Chazakah on failing 3 times. “

NO, IT MEANS HE WINS BUT AGAIN CANNOT FORM A GOVERNMENT

Yes, Netanyahu will win again. But, probably no forming a gov't. His name alone has some special meaning (given by G-D). He will be the last prime minister of Israel who will usher in Moshiach tzdkeinu, b'ezrat H'. The world of lies must fall, it's time and a new world of Emes will be born. We can only pray that the Geulah comes speedily b'rachamim for all Jews and the righteous of the world.

But Moshe, what did you think about the election year diseases? Nefarious, deliberate, . . ?

Even if we think that they're made deliberately by man, (of course, we already know that much of these diseases are man-made-nefarious),it is really H' Who is in control. Everything has a meaning. I, personally think that H' is renewing this world and bringing in the Geulah with great rachamim, rather than all out war. Anyway, we can hope so. We just have to keep trying to do the Will of H' so we bring the Geulah b'rachamim and the world will realize that 'Ain Od Milvado'!