After the death of Alexander the Great, the lands of the Middle East were divided among different rulers. In the north, Syria was ruled by Antiochus Epiphanies who eventually took over as ruler of the land of Israel. Antiochus saw himself as the representative of Greek (Hellenistic) culture which he wished to disseminate throughout his empire.

Jerusalem, the spiritual center of Judaism, with its Holy Temple, great Torah academies and large Jewish population, was the natural target for the fiercest enforcement of the anti-Jewish decrees. To drive their point home, the Greeks built a gymnasium, one of the central symbols of Greek culture, right next to the Temple (the Second Temple). They wished to make Jerusalem a Greek city.

Antiochus Epiphanies imposed edicts against the Jewish religion, banning Shabbat observance, circumcision and Torah study. He built an altar in the Temple and forced the Jews to sacrifice to the Greek gods. The Greeks also erected altars to their gods in the streets of Jerusalem. Eventually they would insist that a statue of Zeus be placed in the Temple itself.

For those reasons, Matitiyahu, the scholarly and righteous scion of the Hasmonean family, moved his family out of Jerusalem, 40 km. North to Modi'in. But the reign of terror followed them there, too.

The Jewish community was divided in response to the appeal for assimilation. Some saw assimilation as a positive and modernizing influence and they welcomed the release from Jewish parochialism. In general, two camps polarized: the Jewish assimilationists (called Hellenists) on one side, and the devout observant community on the other.

The matter came to a head in a small village called Modi'in, not far from Jerusalem. Greek soldiers came one day and demanded that the Jews sacrifice a pig to the pagan god. At first, no one stepped forward and the Jews stood in proud defiance of their pagan oppressors. But then a Jewish Hellenist volunteered to perform the mock offering.

Furious at this outrage, Matitiyahu, from the family of Hasmonian priests (Matityahu was the deposed High Priest of Yerushalayim), killed the man on the spot, and then killed the Greek soldiers who were present. Matitiyahu and his five sons fled to the nearby caves and became the core of a guerilla fighting unit (167 BCE). They were prepared to fight and die to preserve the exclusive worship of Judaism – battling the Greeks not only militarily, but religiously as well.

The elderly Matitiyahu died within a year and never saw the success of the revolt he began. His son Yehudah HaMaccabee ("Maccabee" is an acronym for the Torah verse "Who is compared to You among the mighty, oh Lord" [Exodus 15:11]),  a brilliant tactician and leader, took over as leader. With a handful of people Yehudah HaMaccabee defeated Antiochus' army and liberated Jerusalem in 165 BCE.

Upon entering the Temple, they found that it had been used for pagan idol worship. Everything therein was contaminated. Everything had to be replaced. Even the altar stone was removed and secreted away somewhere under the Temple Mount. Sefer HaMacabim (4:46) states that the stone was hidden until a Navi (prophet) would come and reveal to them what to do with it. A new altar stone was put in place. After many days of preparation, on the 25th of Kislev, the Jews inaugurated the Temple. The inauguration festival for the Temple lasted eight days. Yehuda HaMaccabee then ordained that these eight days were to be remembered and observed throughout our generations. Thus, we have the holiday of Chanuka. 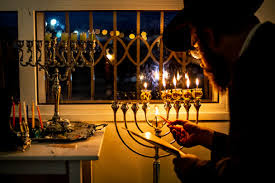 On these eight days we have the opportunity to connect with the Light of Miracles bestowed upon the Jews at that time by God, a special Light reappearing every year during these eight days, to help us achieve miracles in our lives today!

According to The Ari, Rabbi Yitzchak Luria, the souls of Nadav and Avihu (sons of Aharon HaKohen) were reincarnated in Matityahu (Shaar HaGilgulim, hakdama 36).

May the merit of the tzaddik Matityahu protect us all, Amen.
Posted by Neshama at 3:23 PM