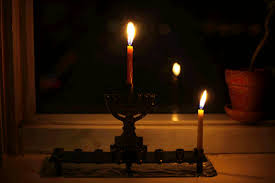 The Gemara (Shabbos 23b) says that one who habitually lights candles will have sons that are Talmidei Chachomim. Rashi explains that the posuk (Mishlei 6, 23) says כִּי נֵר מִצְוָה וְתוֹרָה אוֹר -
"the candle is a mitzvah and the Torah is light". By lighting candles of mitzvah, Shabbos candles and the Chanuka Menorah, one will merit what the Gemara says.

After Kindling the Menorah
The Baal Shem Tov to say

וִיהִי נֹעַם and יֹשֵׁב בְּסֵתֶר עֶלְיוֹן,
(last posuk of Tehilim 90, and the whole Chapter 91, with the last posuk of chapter 91 repeated twice) 7 times after lighting the Menorah. This is a segula to protect from many calamities. (Ramban says to say each word 7 times, but I haven't seen anyone do it like that. I've only seen people saying the whole chapter 7 times.)

According to the Kavonos in the Siddur, each one of these praises of Hashem corresponds to another sefira (1-Keser, 2-Chochma, 3-Binah, 4-Chesed, 5-Gevurah, 6-Tiferes, 7-Netzach, 8-Hod, 9- Yesod, 10-Malchus), making the 8th praise, בּורֵא רְפוּאות - "Creator of cures", correspond to Hod. This makes Chanuka an auspicious time for bringing about healing.

In Shulchan Aruch (570, 2) it says that eating a meal for Chanuka is a סעודת הרשות, a non-obligatory meal. Chazal (Berachos 60a) say that Hashem gave רשות (permission) for doctors to heal. This is what סעודת הרשות alludes to; eating a special meal in honor of Chanuka, which is a special time for healing, can bring about healing. (Shaar Yisaschor, Yimei Orah 72)

Remembrance of Barren Women
Chanuka, and especially the last day, Zos Chanuka, is an auspicious time for the remembrance of barren women, just like Rosh Hashona. One allusion to this is that מתתיהו is numerically equal to ראש השנה. (Bnei Yisaschor, Chanuka 2, 10)

Zos Chanuka - Teshuvah
The days of Chanuka, as brought in many seforim, is the actual final judgment period from Rosh Hashona, making the last day, called Zos Chanuka, because of the Torah reading that day, the final day of judgment.

Reb Tzvi Elimelech of Dinov in Sefer Deverim Nechmadim (Chanuka, 4) brings proof from the Zohar that Chanuka is a time of Teshuva M'Ahava, repentance out of love for Hashem.

Reb Yisroel of Ruzhin, as quoted by his son, Reb Avrohom Yaakov of Sadiger, says that a simple Jew can receive from Hashem on Zos Chanuka, what Tzadikim can on Rosh Hashana and Yom Kippur. (Ner Yisroel 2, 18)

Reb Eliezer of Dzhikov says in the name of Reb Elazar of Lizensk (son of the Noam Elimelech) that Zos Chanuka is an especially auspicious time. (Reb Itzikil of Peshavrsk)

One shouldn't use the shamash for a disgusting use, and certainly not for levity, by playing cards, chas v'chalilah. (Ba'er Heitiv 573:7)

Certainly, one will have to stand judgement for the terrible sin of playing cards by the light of the shamash. (Kav Hayoshor 96)

Every man that fears the word of Hashem, should keep his sons, from when they're young, from these klipos, cards. (Yesod Veshoresh Ha'Avodah 12:1)

Reb Levi Yitzchok of Berditchev says: Due to our many sins, a terrible breach has been made among Acheinu Beis Yisroel to play with cards. It's a light thing in their eyes, but it's known that in each card there is definitely a big klipa… There are many downfalls from this:

1) You lose fear of Hashem.
2) In my eyes you are definitely a thief.
3) You make yourself tamei with klipos that shouldn't even be mentioned. (Kedushas Levi, Chanuka – "Yadua")