Hashem also sends dreams to our enemies. Lavan was warned in a dream not to harm Yaakov Avinu, and, in this week’s Parsha,Paro’s dreams are the gateway to the cosmic events which propelled Yosef to rulership and paved the way for Yetzias Mitzraim.

Paro’s “spirit was agitated” (Beraishis 41:8), because he saw in his dream that his kingdom was destined to collapse. The world’s most powerful empire was in danger from a source beyond Paro’s control. This vision shook him deeply and changed history.

Several weeks ago, a terrible attack in New Jersey profoundly affected many people. Clearly (in the words of the Yated headline), Jews were “targeted.” The attackers were apparently wild and brutal people, out of touch with what we like to think are the norms of civilized society. This incident seemed to emanate from a dark place beyond our ability to reach.

The perpetrators were not isolated or lone individuals. There is a dangerous culture which seems to be growing around us. I personally witnessed, at just about the same time, an incident in Borough Park, involving a person who seemed equally out of control. This incident did not result in injury, thank G-d, but the display of ferocious anger was shocking.

Not only Jews, but many non-Jews with whom I have spoken, are concerned about the future course of world and local events.

We should not be surprised at what is happening. As in the days of Yosef, the dominant cultures of the world are in imminent danger from internal weakness. They have deviated so much from the will of our Creator that dramatic change is almost inevitable.

What is our source of protection in these turbulent times?

“Rabbi Elazar was asked by his students, ‘What can a person do to be spared the travail of Moshiach?’ [And he responded], ‘One should occupy himself in Torah and … acts of kindness.” (ibid) We have to take these words very seriously; our lives depend on them.

We are now at the culminating days of Chanukah. On Rosh Chodesh, a sliver of light will appear in the night sky. Just as Chanukahbegins in darkness and is filled with continually greater light, so it is that, “when the wicked bloom like grass and all the doers of iniquity blossom, it is to destroy them until eternity.” (Tehillim 92)

“The voice of my Beloved …. Behold! It came suddenly, leaping over mountains, skipping over hills. My beloved is like a gazelle or a young hart. Behold! He was standing behind our wall, observing through the windows, peering through the lattices.” (Shir ha Shirim, said during Kiddush Levana)

Yeshuas Hashem k’heref ayin … Hashem’s Redemption comes in the blink of an eye! 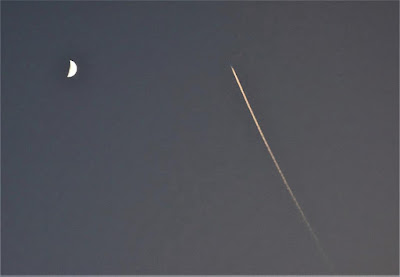 Moon and jet trail over Tzefas