For those who were unable to read this in Chanukah Warm Wishes From President Trump, I have typed it out below: 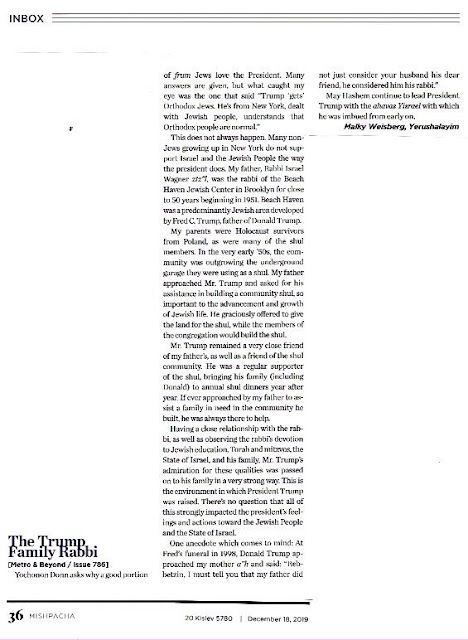 *Yochonon Donn asks why a good portion of from Jews love the President. Many answers are given, but what caught my eye was the one that said “Trump ‘gets’ Orthodox Jews. He’s from New York, dealt with Jewish people, understands that Orthodox people are normal.”

This does not always happen. Many non-Jews growing up in New York do not support Israel and the Jewish People the way the president does. My father, Rabbi Israel Wagner ztz”l, was the rabbi of the Beach Haven Jewish Center in Brooklyn for close to 50 years beginning in 1951. Beach Haven was a predominantly Jewish area developed by Fred C. Trump, father of Donald Trump.

My parents were Holocaust survivors from Poland, as were many of the shul members. In the very early ‘50s, the community was outgrowing the underground garage they were using as a shul. My father approached Mr. Trump and asked for his assistance in building a community shul, so important to the advancement and growth of Jewish life. He graciously offered to give the land for the shul, while the members of the congregation would build the shul.

Mr. Trump remained a very close friend of my father[’s], as well as a friend of the shul community. He was a regular supporter of the shul, bringing his family (including Donald) to annual shul dinners year after year. If ever approached by my father to assist a family in need in the community he built, he was always there to help.

Having a close relationship with the rabbi, as well as observing the rabbi’s devotion to Jewish education, Torah and mitzvos, the State of Israel, and his family, Mr. Trump’s admiration for these qualities was passed on to his family in a very strong way. This is the environment in which President Trump was raised. There’s no question that all of this strongly impacted the president’s feelings and actions toward the Jewish People and the State of Israel.

One anecdote which comes to mind: At Fred’s funeral in 1998, Donald Trump approached my mother a”h and said: “Rebbetzin, I must tell you that my father did not just consider your husband his dear friend, he considered him his rabbi.”

May Hashem continue to lead President Trump with the anabas Yisrael with which he was imbued from early on.