UPDATE: A War on Jews: No Longer Individual Antisemites . . . Tactics Have Changed 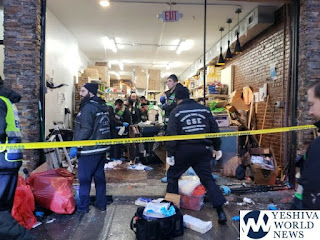 YWN With the Jewish community – literally – under attack for the past three years, with one hate crime after the next, the fear is sinking in. Making matters worse, is the slow response in giving the community valid information. . . Why can’t we be told the identity of the shooters? Why did two individuals arrive in a rented U-Haul truck, armed to the teeth, and open fire as if they war entering a war-zone?

Where is the Attorney General of NJ? Why can’t the community receive basic information in a timely manner? Nearly 20 hours since this brutal attack, and NOTHING? Leaving the community in the dark for 20 hours is wrong, dangerous, and causing fear.

INTERVIEW:  One of the first responders from a Jewish organization on the scene of Tuesday’s deadly shooting in a kosher grocery store in Jersey City said authorities had found some 300 rounds of ammunition and three pipe bombs in a van linked to the shooters

"I came here about an hour after the shootout finished. I was one of the first to respond to the command,” said Wollner. "It's a very small community. . .”


Reminds one of the shootup and siege at the Hypercacher kosher supermarket in Paris
and the Teacher and three children killed at the Jewish Ozar Hatorah school in the French city of Toulouse.

Wolner said the grocery store was in the center of the local Jewish community, next to schools and a local yeshiva. Students in an adjoining unit found shelter in the basement, locking themselves in for hours until police had secured the store.

"About an hour after the whole shooting stopped, they allowed them [the students] to go out, to another beis medresh [yeshiva study hall] two blocks down."

"Right after everybody was released from the building and taken to another building, a lot of volunteers from many different organizations came together to support everyone with mental health and comforting,” continued Wollner.

"Chesed Shel Emes brought in a whole truckload of food, because this is the only grocery here, so a lot of people from stores, bakeries, sent food."

Wollner added that a U-Haul van found nearby contained some 300 rounds of ammunition and three pipe bombs.

Four people were killed Tuesday, aside from the shooters, after the assailants gunned down an undercover cop, identified as Joseph Seals, in a cemetery less than a mile away from the JC Kosher Supermarket – the sole kosher grocery store in Jersey City.

During a shootout later with police, both the suspects were killed. Three police officers were wounded, along with one civilian.

Police said they recovered a stolen U-Haul truck, inside of which they found an incendiary device that has been turned over to the bomb squad for examination.

Was there a warning beforehand?
Were authorities on the look-out for trouble?
Is this the beginning of a “european type assault” on Jews?
Are the “shooters” American or foreign? It does resemble other terror attacks in Europe (Germany, England, France, etc.)