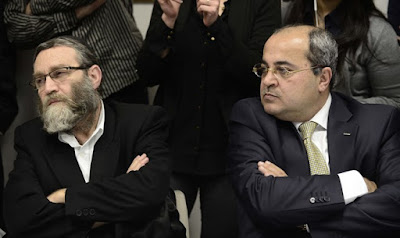 The Kaminitz Law is the term for the amendments to the Planning and Building Law in 2017, which was formulated following extensive administrative work by a staff headed by Deputy Attorney General (Civil), Adv. Erez Kaminitz.

Earlier this month, the Joint Arab List attempted to force the freeze in a coup just before the Knesset dissolved. After Regavim representatives arrived at the midnight discussion, the right-wing parties decided that in case the Justice Minister wishes to change the law, the matter will be brought before the Finance Committee instead of the Interior Committee, since the Interior Committee does not work during the lead-up to elections.

However, Regavim recently discovered that MK Ahmad Tibi, chairman of the Joint Arab List, is working with Gafni to freeze the law and bring back the previous situation, in which illegal construction went unpunished, especially in the Negev and Galilee. This coup included threats to Justice Minister Amir Ohana (Likud) that if the law is not frozen, the Justice Ministry will not receive the funds - equally dozens of millions of shekels - intended for it.

The illegal construction in question, which the Supreme Court called a "national calamity," occurs in areas not zoned for construction, causes harm to infrastructure and prevents the development of the areas in question.