"Motta was very depressed. He informed me that he had received orders not to enter the Old City but rather to surround it from all sides. Under no circumstances was he to enter the city. He added that apparently the policy was to leave the Old City in the hands of the city's Arab population without conquering it.

"To this I replied that were I in his shoes I would not be able to resist such an historic opportunity to liberate the Temple Mount after two thousand years. After all, what is the worst that could happen? They could put me on trial and perhaps sentence me to imprisonment. Better that I spend my whole life in prison so that Jerusalem and the Temple Mount be free than to be free while Jerusalem remained enslaved.”

From the diary of Rabbi Shlomo Goren (chief rabbi of the IDF in 1967). 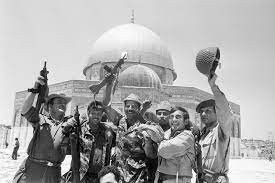 I reprint this remarkable diary entry on Jerusalem day.

Why did the chief rabbinate declare this to be a national holiday?

Most know the answer; In June 1967, Israel was miraculously saved from certain and cruel annihilation by her Arab neighbors. We also returned to our people’s holiest, most treasured soil and sites after so millennia of longing and dreaming.

Pretty good reasons for a People to celebrate and offer thanks, no?

Which Jews today actually celebrate this day. Which Jews are even aware of it?

Outside Israel perhaps a very small pocket of - shall I say, “Young Israel” type Jews – maybe. That’s it.

And in Israel, where it really counts?

Israel’s Arabs call it the day of “the disaster”.  They remember.

Secular Jews for the most part are not involved, at best.

Some see the day as an unnecessary provocation to the Arabs who are not happy with Israel’s miraculous escape from genocide in 1967.  Remembering the Jewish return to its holiest sites simply upset them. Is that nice?

Liberal Judaism is far more Liberal than Jewish it would seem.

The “Haredi community” or at least their leadership, turn their noses up at anything that smacks of a national nature. It is deemed irrelevant, childish and dangerous. 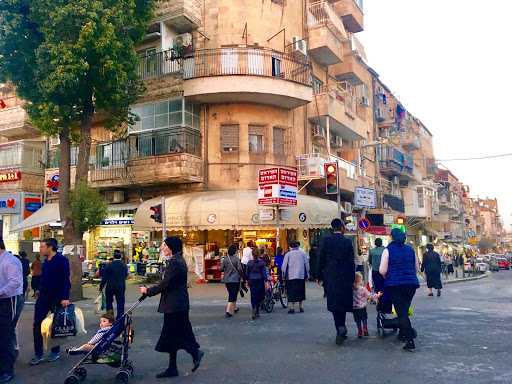 Life at the mercy of the Nations was so much holier.

The fulfillment of the prophets’ words upset their idyllic lives and religious certitude.

Who else is upset today?

The rest of the world.

As Arabs attack Jews in Jerusalem on this day, angry condemnations and warnings roll in from all over the world; not condemning Arab lynching and terrorizing Jews and burning Jewish property but something the Jews did. I’m not sure what it is this time. But that never matters.

If the world is upset it only means that we are doing something right.

Restraint is urged on “all sides”

Imagine an outside body calling for “restraint on all sides” after the Japanese attack on Pearl Harbor.

Why is Jerusalem (when the Jews are in control) such a red flag for the entire world?

You would think there are some other problems around the world.

The prophets; Isiah, Ezekiel, Zacharia, Joel, all foretold the event of the period we are living in now. They spoke of all the Nations coming against Jerusalem as is happening today and how God stands with His People against the rest of the world. 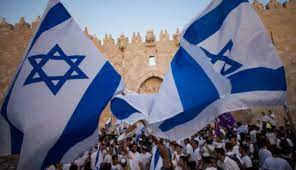 They drank from the springs of the great revolutionary thinker of Jewish national/spiritual redemption.  Rav Kook taught what it means to be a Jew in our prophetic times.

They understand that without destiny, existence is meaningless.

It reminds me of a quote by Nietzsche; “He who has a why, can bear almost any how”

Which people today in Israel possess the why?

There are Jews who would prefer to erase our “hard drive memory and induce national amnesia.

Prime minister Olmert said, “we are tired of fighting, tired of winning. We want a country that is fun to live in”.

The Muslims know the answer. The Israeli elites hate the uncomfortable question.

Some need to be reminded that Israel wasn’t created to make Jew haters happy.

Tampering with our truth and honor to please our enemies has not bought quiet.

Today as I write, Netanyahu declared that Jerusalem is experiencing violence at the hands of “intolerant people.”

Take that in for a moment. I thought it was Arabs attacking Jews.

Did I miss something? We are led by people who fear the word enemy, victory right or wrong.

Netanyahu is a very skilled politician. He is a great pilot – flying to where?

It remains a mystery.

In the exile Jews were hostage to their hosts. Today in our own land it seems that we have made ourselves hostage to our guests.

This article will not be seen on Facebook. I am banned.

Shalom Pollack is a tour guide, writer and filmmaker in Jerusalem.

He is writing a book, ” Despite ourselves”

Very good post.
What can be expected from a leadership that shows no real Jewish feeling for the Jewish people, for our holy Torah and our holy Eretz Yisrael? Leaders such as Peres and Olmert (moreso, they were the Armilus of their times) were the thorns in the sides and thistles in the eyes of our people, together with the wild enemies within our midst.
Netanyahu, unless he proves otherwise, is no better. May H' have mercy and send us our righteous Moshiach Ben Yosef ASAP to take over and fight our enemies and the world will see miracles as never before and know that there is only G-D. May our Father in Heaven protect kol bnei Yisrael in Eretz Yisrael from all evil and bless every Jew everywhere and that we merit the coming of our righteous Redeemer.