May 7, 2017: Earth's Oceans are losing oxygen at a very rapid rate. This is putting tremendous stress on every living creature in the seas. If the food chain gets broken to badly then a 'domino effect' begins and would begin the demise of ALL living things on planet earth. The fate of earth depends on these oceans being healthy, if they are not then the planet is not...simple as that. If the UV is at unhealthy levels where it is normally not then this more than likely is a contributing factor, it has to be. Its probably associated the the 'Red Skies' we've been observing. (Oxygen Depletion).

I personally believe the strong UV light is the main culprit, but not the only one. The UV is tampering with hydrogen atoms, creating warmth, intense heat like we feel on our skin, completely separate from air temperature. 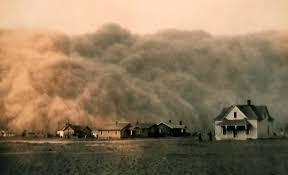 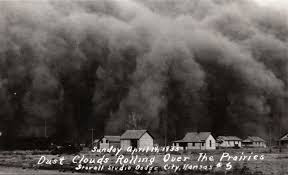 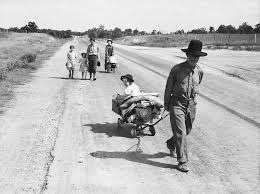 Dust Bowl Years
The Dust Bowl, also known as the Dirty Thirties, was a period of severe dust storms that greatly damaged the ecology and agriculture of the American and Canadian prairies during the 1930s; severe drought and a failure to apply dryland farming methods to prevent wind erosion (the Aeolian processes) caused the phenomenon. The drought came in three waves, 1934, 1936, and 1939–1940, but some regions of the high plains experienced drought conditions for as many as eight years.[1] With insufficient understanding of the ecology of the plains, farmers had conducted extensive deep plowing of the virgin topsoil of the Great Plains during the previous decade; this had displaced the native, deep-rooted grasses that normally trapped soil and moisture even during periods of drought and high winds. The rapid mechanization of farm equipment, especially small gasoline tractors, and widespread use of the combine harvester contributed to farmers' decisions to convert arid grassland (much of which received no more than 10 inches (~250 mm) of precipitation per year) to cultivated cropland.[2]

During the drought of the 1930s, the unanchored soil turned to dust, which the prevailing winds blew away in huge clouds that sometimes blackened the sky. These choking billows of dust – named "black blizzards" or "black rollers" – traveled cross country, reaching as far as the East Coast and striking such cities as New York City and Washington, D.C.

Which nuvi says Moshiach will come when a sick man wants a fish and there isn't any to be found??