'Run, it's coming. Let's go!’
Dramatic moment truck is swallowed by an ash cloud as villagers flee '1300 Fahrenheit pyroclastic flows' from Guatemala's Volcano of Fire which has killed at least 69

This is the dramatic moment a truck was swallowed by an ash cloud as Guatemala's Volcano of Fire erupted claiming 69 lives.

Footage filmed from inside the vehicle shows the driver sounding the horn and performing a u-turn in the road as a giant mass of smoke gathers in the background.

Someone can be heard shouting 'run, it's coming. Let's go!' as fellow motorists attempt to flee the eruption. But as the truck drives off down the road, it suddenly becomes engulfed by the toxic cloud, plunging the vehicle into darkness.

The clip emerged after the volcano exploded in a hail of ash, smoke and molten rock. Emergency crews continue to work through the debris and mud on smouldering terrain still hot enough to melt shoe soles. 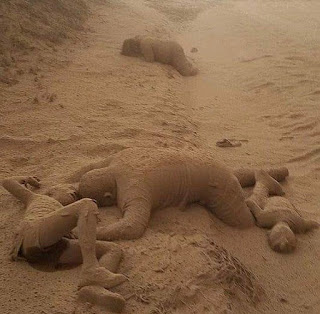 Bodies were coated with thick ash and rescuers were forced to use sledgehammers to break through the roofs of houses buried in debris up to their rooflines to try to see if anyone was trapped inside.

It came after searing flows of lava, ash and rock mixed with water and debris gushed down the volcano's flanks, blocking roads and burning homes.

The fast-moving pyroclastic flows overtook people in homes and streets with temperatures reaching as high as 700C (1,300F), and hot ash and volcanic gases that can cause rapid asphyxiation. Fire was still too hot in many places Monday to pull out bodies so thickly coated with ash that they looked like statues.

Guatemalan authorities put the death toll at 69, but officials said just 17 had been identified so far because the intense heat of the volcanic debris flows left most bodies unrecognisable. A number of children are among the dead.

PAHOA, HAWAII (HawaiiNewsNow) -
A massive river of lava covered hundreds more homes overnight as it poured into the sea, filling all of Kapoho Bay and decimating entire neighborhoods. It's believed to be the single most destructive day of any eruption in modern times. And it not only took homes, it completely filled Kapoho Bay, extending .8 miles from the coastline. "It's saddening, it's disheartening to see it go like that," said Jason Hill, whose father lives in Kapoho. "The anxiety lies in what happens next."

He looks toward the earth and it trembles (i.e. an earthquake); He touches the mountains and they smoke (i.e. a volcanic irruption) [Tehillim 104:32]. More importantly, we need to remember, "'Misfortune comes to the world only on account of Israel…' (Yevamos 63a, see Rashi "בשביל ישראל and Rashi to Shemos 7:3 "ואני אקשה"). The Meiri says, 'If misfortune rains upon the Jews themselves, they should assume responsibility for the tragedy...'" (Artscroll Yevamos 63a, note 44)