Sullivan County Locals Verbally Attack Orthodox Jews Over Measles
Measles = Antisemitism
And So It Begins… Tens of thousands of Orthodox Jews will be making their way to their summer homes and camps in Upstate NY in the next 3 weeks, and some locals are becoming vocal about their concerns that there is a measles outbreak in the community.


….multiple reports over the past few weeks of local residents in Sullivan County making nasty comments towards Orthodox Jews about vaccination and measles.

...incidents in Fallsburg, Woodridge, Walmart in Monticello, and most recently (over Shavuos) on a road in Kiamesha / Monticello. In all the incidents reported to YWN, Jews were either yelled at or cursed at . . . .

...[W]arned not to come upstate for the summer.

You Won’t Believe It Until They Attack You Personally!
YWN:  On a local Sullivan County Facebook page, which has a long history of allowing anti-semitic comment to flow freely, the attached image was posted last week. As could be expected, the hateful comments about Jews, taxes, food stamps, and driving minivans upstate followed the post. 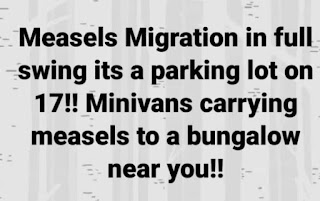 The Next Step Is To Link (Jewish Measles Victims) With The Current Ebola Spread That Is Scaring Health Officials. And you think this is not planned? Jews are being scapegoated by the Progressive Enemies of everything that is GOOD; the Torah, the Jews, and G-d. There is No End to their manipulations. This has been orchestrated and ongoing for many many years. As a semi-final solution to their diabolical plans for the world.

THE MEASLES ONSLAUGHT IS MOVING TO THE COUNTRY

“Health officials in New York City have taken a tough approach, making measles vaccinations mandatory for everyone living in the Brooklyn neighborhood that is the epicenter of the outbreak, fining people for failing to get inoculated and closing 12 schools for failing to exclude staff and students who couldn’t document immunity. The city announced the two most recent closures Thursday.

Now, as schools prepare to close down for the summer, the fight is spreading into the Catskills and Hudson River Valley.

Sullivan County is in the heart of the traditional Borscht Belt, and the lake-laden area still attracts thousands to its camps and bungalow colonies each summer. Of the 170 state-regulated camps in the county, 139 are Orthodox Jewish camps.

“We draw such a population from New York City, where this measles outbreak was,” Sullivan County spokesman Dan Hust said. “It was considered prudent and wise.”

THEY ARE SAYING THAT EVERYONE NEEDS TO BE VACCINATED Except those who had Measles as a child. WHY IS THAT? BE AUSE THEY ARE “FOREVER IMMUNE”. So why not allow children to get the childhood measles so they too will be IMMUNE! Why apply Small Pox hysteria to a childhood disease unless ther is another reason for demanding vaccinations?

Unfortunately, the Constituion is being shredded daily; the ignorance of the populace and even those who supposedly teach in schools do not know much about it either. Thus, we see how they feel free to mandate what they are not allowed to. Guess this is the way, H' is pushing the Jews to start thinking of Aliya. There are many who want very much to make Aliya but cannot for varied reasons. But, this is really a wakeup call to make those who are unaware and uninformed realize what's happening.