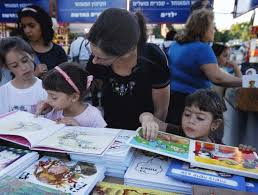 Between June 12 and June 22, hundreds of events are set to take place throughout the country, including lectures, book signings and round tables. JPost

In Tel Aviv, most of the events will be held in Rabin Square; in Jerusalem, at the First Station and in Haifa at the Merkaz HaCarmel Auditorium. 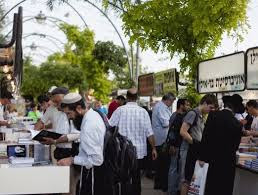 Ahead of the Book Week, the National Library of Israel has released its Israel's Annual Book Report. 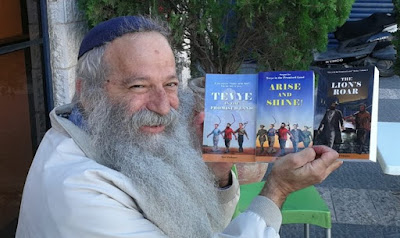 In honor of Book Week in Israel, which stretches out in bookstores for most of the month, Arutz Sheva spoke to author and movie director Tzvi Fishman, to learn what it’s like to be a writer of Religious Zionist novels and books. arutzsheva

If you get to the Sifriyat Bet El booth at the Jerusalem Book Fair, you’ll find Fishman’s two new sequels to his popular saga, Tevye in the Promised Land. The exciting Zionist adventures, Arise and Shine! and The Lion’s Roar, contain colorful portraits of the larger-than-life heroes of the dramatic era, including Yosef Trumpeldor, Ze’ev Jabotinsky, Rabbi Kook, David Ben Gurion, Avraham Yair Stern, Uri Zvi Greenberg, Menachem Begin, and more. The always-surprising author manages to weave the infamous Jewish gangsters Bugsy Segal and Meyer Lansky into his tale as well.

When you became religious, did you think you would
continue to pursue your career in creative writing?

"Not really. I was happy to dump the emptiness of Hollywood and my dream of becoming a famous American novelist. I thought that maybe I would one day write for a Jewish newspaper, nothing more than that. After making Aliyah, and learning Torah in the Machon Meir Yeshiva for a year, I started to feel that I had to write about what I was experiencing, to share my joy with others. I asked Rabbi Shlomo Aviner what to do and he advised me to continue learning Torah for another few years. That way, he explained, when I returned to writing, everything I produced would have a much deeper meaning and impact. He suggested that in the meantime, I continue to write short stories and essays so that I wouldn’t forget the craft. 'It's written that the Children of Israel came out from Egypt with great wealth,' he told me. 'You came out of Hollywood with the wealth of knowing how to write stories. That is a talent that Hashem wants you to use, but for now, keep learning Torah'.

What are some of your other books?

“Days of Mashiach is a collection of off-beat short stories about Jewish life in Israel and the Diaspora. The Discman and the Guru is a novel about a Jewish, Holden Caulfield-like character who journeys around the world searching for Hashem. Arriving in Jerusalem, he innocently ascends to the Temple Mount and nearly triggers the Third World War. Dad is a novel loosely based on the years I took care of my aging parents when my mother developed Alzheimer’s Disease. There are a bunch of other books available on Amazon.
Posted by Neshama at 6:03 PM