A SPUNKY "DOVID HAMELECH” IN THE KNESSET 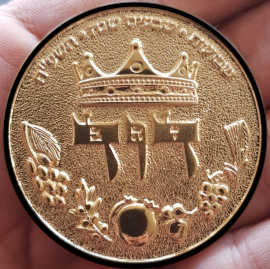 Newly appointed …
Minister Bezalel Smotrich on Monday said he “works for God” — and not for Prime Minister Benjamin Netanyahu, who appointed him — after drawing outrage and ridicule for calling for Israel to be governed by Jewish religious law, like in biblical times.

Earlier in the day, Netanyahu tapped the top two lawmakers in the Union of Right-Wing Parties (URWP) as ministers in his interim cabinet, putting party leader Rafi Peretz in charge of the Education Ministry and giving its No. 2, Smotrich, the transportation portfolio, along with a spot on the high-level security cabinet. Peretz received observer status on that body.

“I am not the prime minister’s man, I am a man of the people,” Smotrich told the Kan public broadcaster. “I am a man of the public who sent me, and — I hope I’m not starting an outrage here — I work for God and do what I believe is good for the State of Israel and the people of Israel, according to my worldview.”

“When you move from the stands to the field, on the one hand you have more influence, but on the other hand you take ministerial responsibility also for decisions you aren’t happy with. You have to bite the bullet,” he said.

Earlier, Smotrich said he would continue to gun for his preferred position of Justice Minister, despite recent comments by officials in the ruling Likud party that seemingly put him out of the running for the job.

“Our hope to get the justice portfolio has not disappeared, but for this we will have to work hard and win in the upcoming elections,” he said.

The appointment of the hardline lawmaker drew swift and snarky criticism from opposition lawmakers and others.

BUT:
Smotrich acknowledged during the TV interview that, as a minister, he would have to vote for moves he does not necessarily agree with.

IN A GEULADIGGE MASHIACH MOVE:
Smotrich has been lobbying several right-wing factions to unite and run on a single ticket to increase the number of seats they can win and better drive nationalist agendas, such as annexing the West Bank.
Posted by Neshama at 11:48 AM

B'H. at long last a minister in the "Jewish" knesset who talks like a Jew! He is correct, but am afraid while the 'state' is under Erev Rav leadership, it will be a long hard uphill battle to get to square one. Hoping this is just, at least, an indicator that Moshiach is not too far off.

Thank you. At least one reader sees what the possibilities are in him. And HaShem can maneuver those erevravniks out of control. It has to be that way. We are running out of time.

Hashem should bless Smotrich and grant him success in everything he does, he is obviously acting le'sheim shamayim.