THE BLOOD THIRSTY ARSONISTS ARE AT IT AGAIN 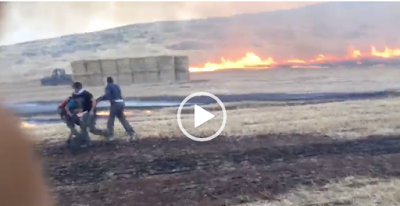 Fire rages in hills of Itamar, apparently as a result of arson. Great damage caused to farmers. 'The heart breaks.’ 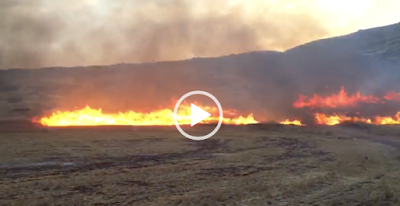 A fire has raged since Wednesday night in the hills of Itamar in Samaria. So far, about 7,000 dunams (1,700 acres) of farmland and pastures have been burned. It is estimated that the damage to the farmers in the area is over NIS 700,000.

“This is the fourth fire to break out in 4 days, endangering residents and families, destroying years worth of work by farmers. The heart breaks,” said Iyar Segal, a resident of the Itamar hills. "We expect the Civil Administration, the IDF and police to arrest the arsonists with a strong hand, and to assist the farmers and residents."

Yossi Dagan, head of the Samaria Regional Council, said: "The heart breaks to see thousands of dunams of farmland and pasture burning. I demand an investigation into the matter to find the culprits and bring them to trial. The farmers, who really sacrifice themselves to work the land and make desolation bloom, cannot be the last ones on the food chain. They should be helped and the fires should be stopped in every possible way. “ arutzsheva (including screenshots)

WEEKLY TERROR REPORT
Not just fire, but ARSON:
Hundreds of fires in the areas of Jerusalem and Beit Shemesh confirmed to be the result of Arson, Boomerang weekly terror report. arutzsheva

Here are the facts from the wave of fires that began in Israel on November 2016:

In Haifa for example, 527 apartments were destroyed leaving 1,600 people homeless. 75,000 residents were evacuated and more than 20,000 dunams of forests burnt.

After a thorough investigation, it was determined that out of 80 fires that were checked, 71 were the result of arson.

Firefighter Ran Shlaf, considered the premier authority in fire investigations in the country said: “Yes. We've faced arson terror. There is no dilemma or doubt about it. All the villages that were burned were Jewish, and all those arrested or prosecuted were Arabs. And from a thorough investigation we conducted, no one else in the Middle East - including the Palestinians - experienced such an extreme wave of fires like we experienced".
Posted by Neshama at 10:51 AM