The Galilee earthquake of 1837, often called the Safed earthquake, (Magnitude 6.25–6.5) shook the Galilee on January 1 and is one of a number of moderate to large events that have occurred along the Dead Sea Transform (DST) fault system that marks the boundary of two tectonic plates; the African Plate on the west and the Arabian Plate on the east. Intensity assessments for the event were VIII (Damaging) on the Medvedev–Sponheuer–Karnik scale and VIII (Heavily damaging) on the European Macroseismic Scale.


A 1977 assessment of the event that was published in the Bulletin of the Seismological Society of America had the epicenter just north of the city of Safed and the magnitude of 6.25–6.5, but in 1997 seismologist Nicholas Ambraseys argued that the event may have been more substantial. The event was well-documented by the nineteenth-century missionary, archaeologist, and author William McClure Thomson. The region in which the earthquake occurred was part of the Ottoman empire but at the time it was under control of the Egyptians who were occupying after seizing it during conflict.

Preface
William McClure Thomson arrived in Beirut in 1833 for missionary work and was in the area at the time of the earthquake. He wrote, in fine detail, of the damage and personal tragedies he witnessed during his travels in the book The Land and the Book, Or, Biblical Illustrations Drawn from the Manners and Customs, the Scenes and Scenery of the Holy Land. The book was published in 1861 and remained a best seller through much of the nineteenth century.[5] In the region, the Egyptians (led by Ibrahim Pasha of Egypt), had recently succeeded in overpowering the Ottomans and gained control of Syria during the Egyptian–Ottoman War (1831–1833). During his time in the area Thomson was locked up with charges of spying. The Egyptians were ultimately flushed from the region by Turkey.[6]

Earthquake
The Dead Sea Transform, also known as the Levant Fracture, produces strong but infrequent earthquakes, and all pre-instrumental information regarding the area shows that it was experiencing an inactive period during the twentieth century.[7] Researchers M. Vered and H. L. Striem conducted a study on both the 1927 Jericho earthquake and the January 1837 event, with a close look at damage data to gain a good estimate of Modified Mercalli intensity values. The 1927 event was both macroseismically and instrumentally recorded, and that provided a good opportunity to closely examine the macroseismic and instrumental epicenter location, estimates of its depth, and methods used in the macroseismic investigation. Once validated, the processes of analyzing the macroseismic data were applied to the earlier 1837 event. The meizoseismal areas of both of these Jordan Rift Valley events were along a north-south line near the fault zone.[8] 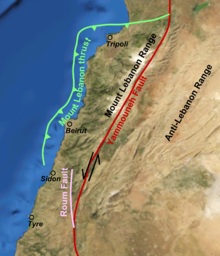 Several other previous events occurred in the same region, and by comparison both the 1202 Syria earthquake and the Near East earthquakes of 1759 had larger magnitudes than the 1837 event and have been associated with the Yammouneh fault in Lebanon.[9] However, no other earthquakes of similar size occurred in the Dead Sea zone after seismometers began being used around the turn of the twentieth century, so Nicholas Ambraseys mapped the intensity values reported from more than 120 locations within the affected area and used the values to create a relationship with a group of 158 earthquakes in nearby Turkey and northern Syria with known intensities and magnitudes to predict the surface wave magnitude for this event. The average radius of the isoseismals in the area helped to estimate a magnitude of 7.0 to 7.1 for the event.[4]

The mainshock occurred around four in the afternoon, followed by a second strong shock five minutes later,[1] and was felt as far as 500 kilometers (310 mi) away. Damascus's maximum perceived intensity was estimated to be VII (Very strong) on the Medvedev–Sponheuer–Karnik scale, while Ramla and Baalbek were at VI (Strong), and cities such as Cairo, Tarsus, and Gaziantep (formerly Aintab) were at III (Weak).[10]

Wave damage
As a result of the earthquake, a strong seiche (standing wave) swept the shores of Tiberias causing additional death.[11][12] [. . .]

Aftermath
Three large aftershocks occurred several weeks after the main event. On January 16 in the northern end, January 22 near the middle, and in the north again on May 20 near the city of Hasbaya (west of Damascus). The aftershocks were spread over a distance of 70 kilometers (43 mi) and that length matches the north-south region of the epicentral area that was mapped by Ambraseys and could indicate that the Roum fault, and its extension south to the Sea of Galilee, were sources of the event.[9]

Continue reading text, references and images at revolvy.com, but information is from Wikipedia: Galilee Earthquake 1837