Earthquakes, Israel, and the Temple Mount – Part I

Another Earthquake of 3.2 magnitude was felt Monday evening in the area of Tiberias.
No injuries or damage were reported.

This is the ninth earthquake felt in the area in recent days. Today, Home Front Command teams have begun mapping the dangerous structures in the city, which are liable to be hit by a strong earthquake. In recent days, city residents reported damage caused to various buildings due to the wave of earthquakes. These are mainly minor damages.

The Defense Ministry announced earlier this week it will hold a special conference to plan protection against earthquakes. The next day the Knesset's Home Front Subcommittee will convene and discuss earthquake preparations.

Last night an earthquake of 3.4 magnitude was felt in the area of the Sea of Galilee. Previously there were three quakes, the strongest of which was 3.9


Earthquakes, Israel, and the Temple Mount – Part I
Based on 300-400 year historical cycles, the pattern of recent tremors, the Middle East should be expecting a major earthquake in the near future, according to geologists in Tel Aviv. Tel Aviv Exact Sciences, Earthquake Research


Verse in Zecharia, ch 14, describes two instances of earthquakes, one of which split apart the Mount of Olives:

14.2 And I will gather all the nations to Jerusalem to wage war; and the city shall be captured, and the houses shall be plundered, and the women shall be ravished, and half the city shall go forth into exile-and the rest of the people shall not be cut off from the city.
14.3 And the Lord shall go forth and wage war with those nations, like the day he waged war on the day of the battle.
14.4 And on that day His feet shall stand on the Mount of Olives, which is before Jerusalem from the east. And the Mount of Olives shall split in the midst thereof-toward the east and toward the west-a very great valley. And half the mountain shall move to the north, and half of it to the south.
14.6 And it shall come to pass on that day that there shall be no light, only disappearing light and thick darkness.

*This confirms the accuracy of the bible.


[See more interesting maps at bottom of this post]

A 3 year study, conducted by the Geological Survey of Israel, found that the Old City is more at risk than modern neighborhoods because of its ancient construction and the underground layers of shifting debris left behind by ransacking armies, said Amos Bein, the center’s director.

“The layer below is not made of solid rock, but rather a kind of rubble,” Bein said. Those weak foundations could magnify an earthquake’s seismic wave. Due to excavations under the Temple Mount to expand the area for mosque activity, weakening the foundational support systems, theTemple Mount would be especially vulnerable if another earthquake would occur in Jerusalem.

The Great Rift Valley runs for 3,000 miles between Syria and Mozambique and passes through the Dead Sea, below Jerusalem’s eastern hills. The fault line was caused by the separation of African and Eurasian tectonic plates in ancient times, a split that weakened the Earth’s crust. 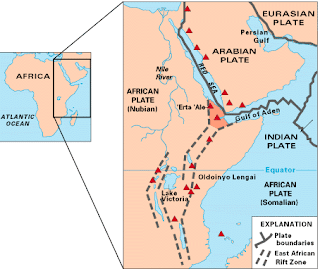 There is also a prophecy that Damascus, Syria, will be destroyed, which has not happened yet.
Yeshayahu-Isaiah 17.

17.1 The harsh prophecy concerning Damascus; Behold Damascus shall be removed from [being] a city, and it shall be depth of ruins.
17.2 The cities of Aroer shall be abandoned; for the flocks shall they be, and they shall lie undisturbed.
17.3 And a fortress shall cease from Ephraim and a kingdom from Damascus, and the remnant of Aram; like the glory of the children of Israel shall they be, says the Lord of Hosts.
17.7 On that day, man shall turn to his Maker, and his eyes shall look to the Holy One of Israel.

[The above was taken from a blog that cannot be linked to because of invisible links; however the information seems reliable.]

Zechariah and Yeshayahu text is from Chabad Library


Earthquake at the Temple Mount!

Israel's experience with earthquakes is minimal, but anticipation is growing that the big one prophesied for Jerusalem is about to strike. During the festival of Sukkot Jews reading the Haftarah are reminded about the foreseen quake. Prophet Zechariah's words are read every year on the first day of Sukkot, but most translate this in its traditional form without much further analysis. A big quake will split the Mount of Olives somewhere along its north-south axis and a Valley will open. However, a closer reading reveals an alternative complexity.

The land, in two movements along the axis will shift east, west and north, south opening a chasm along the ridge of the Mount of Olives that expands into a new valley, stretching and flattening the land in between and re-aligning along the Kidron Valley floor (see squiggly line in the image). This could mean that the black line - north (in the distance) that marks the bridge that once was used by the High Priest to avoid impurities conveyed by dead bodies buried between the Temple Mount and Mount of Olives, will be adjusted. The grave sites on the South Western apex of the Mount of Olives facing the City of David, will move toward it.

The chasm that will mark the new valley will run somewhere along the white line, which was relevant to a previous article I wrote regarding the location of the city of Ay (Ai). For those that are familiar with the landscape, the Seven Arches Hotel (immediately under the West Arrow) marks the spot Joshua’s army once awaited his ambush party sent to decoy the residents of Ay into the desert, east toward the Dead Sea after which he attacked and burned the city.

A re-alignment of the entire landscape makes sense only if the site of the future Temple in Jerusalem also shifts south to occupy the high ridge above the Gihon Spring at the City of David, which is documented in this video link. Many possibilities exist, but a static reading and understanding of Israel’s prophetic writings and teachings should not be taken for granted. In any event realization of Zechariah’s prophecy is not associated with the disaster one would normally attribute to an earthquake of this magnitude. However, its implication for Jerusalem, Israel and the world will be significant.

[this part of the text is from israelfact.blogspot 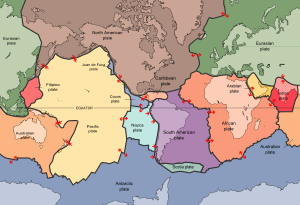 MAPS:  The Twelve Tribes and
The Land in the Time of Yehoshua: 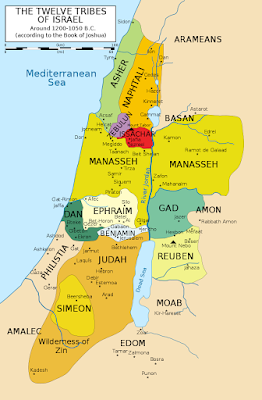 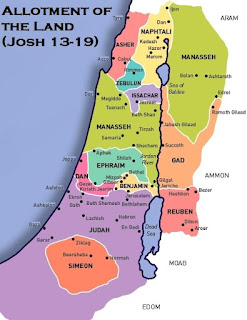 An Estimation of Modern Lands in the Pangea
open culture 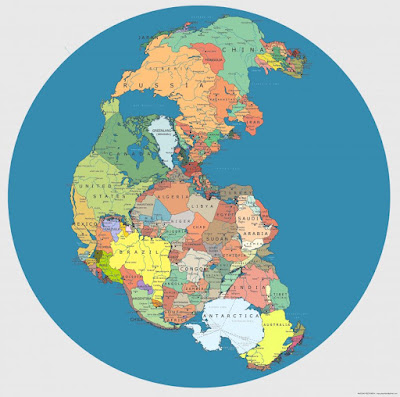 So the aspect that I question is the part where you wrote that Damascus Syria has not been destroyed yet. I was under the impression that it is as the whole place has been turned in to a literal he11 hole and Assad has allowed(instigated ) this due to his greedy and evil ways.
What do you (or anyone think?)

The prophecy of Zachariah shows the world events in the end of times, which will affect not only Jews but all the nations of the world. Only Jews, who are connected to Hashem are not influenced by mazalot and have divine protection. For others, who think , that natural disasters are run by nature, they better pay attention to the sky. "Mars is about to loom large in the sky during its closest encounter with Earth in 15 years. "The Red Planet is set for its closest encounter with Earth since 2003 next month when it reaches ‘opposition’ with the Sun. This stunning celestial wonder also coincides with a ‘Blood Moon’ lunar eclipse which will be the longest of the 21st century."https://metro.co.uk/2018/07/09/mars-earth-cosmic-close-encounter-wont-want-miss-7694458/. Last time, when Mars was closest to the Earth, Iraq war started.
There is also will be a celestial event, when all the planets will be in opposition to the Sun , I am sure, it has some significance in the mazalot structure. Now about the Africa, it can become a reality that continent will be partioned. "An Enormous Crack Just Opened Up In Africa, Evidence Africa Is Literally Splitting In Two"https://www.forbes.com/sites/trevornace/2018/04/02/an-enormous-crack-just-opened-up-in-africa-evidence-africa-is-literally-splitting-in-two/ Now all over the world people reporting strange sounds heard from the sky and It's keep intensifying https://www.sott.net/category/4-Earth-Changes Things are on the move, but people asleep in their numbness.
Chana

Good question.
Leah, I think Damascus also refers to Assad and his control over his army. i didn’t write that, the source is included at end of article.

Anon, I think it was determined that “bad” prophecies do not necessarily have to happen. In another shiur by Rabbi Mizrachi that he gave in 2015 about all the suffering occurring then, he gave a parable that a grocery owner that used to keep a pinkasim of purchases that customers hadn’t paid yet. One day he told these people, no more credit, you all must pay up. Then he said that HaShem was closing His pinkasim, and all credits need to be called to account. Thus, some of us suffer here so it will be better when we go to Shamayim.

Of course he explained it better than me.