DEBLASIO WANTS TO ‘DEFUND THE POLICE’?! 8 Shot In Brooklyn In 3 Hours Last Night

YWN. A series of overnight shootings across Brooklyn has left at least eight people wounded, according to police. There was also one shots fired incident as well. All of this happened in around three hours – and comes on the heels of failing NYC Socialist Mayor Bill DeBlasio pandering to the “Black Lives Matter” movement, and vowing to “defund the police”.

DeBlasio laid out the next wave of police reforms on Sunday, including shifting funds from the NYPD to youth and social services, in the aftermath of days of protests over the death of George Floyd in Minneapolis. “The details will be worked out in the budget process in the weeks ahead. But I want people to understand that we are committed to shifting resources to ensure that the focus is on our young people,” de Blasio said. “I also will affirm we will only do it in a way that is certain to continue the city will be safe.” 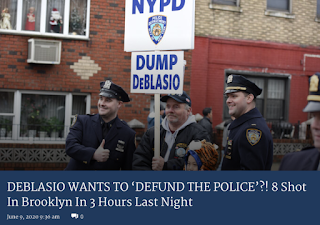 The mayhem over night began at round 10:40 p.m. on Bristol Street in Brownsville.

Police said a 23-year-old woman, 17-year-old man, 35-year-old man and 50-year-old man were all shot. The female victim was seriously wounded, but the men suffered non-life-threatening injuries. About 10 minutes later, two men were shot in the leg on Bainbridge Street in Bedford-Stuyvesant.

Police said the 27-year-old and 34-year-old’s injuries were also non-life-threatening. Then shortly before 11, a 35-year-old man was shot in the back at the corner of Ditmas and Flatbush avenues in Flatbush. He was listed in stable condition. Police said another man was shot in his leg and stomach around 2 a.m. near Avenue K and East 36th Street in Flatlands. His injuries were also non-life-threatening

So far, no arrests have been made in any of the incidents.


Protestors are Ok.
But Children in a Playground Need to Leave.

AGAIN IN WILLIAMSBURG: Hasidic Children Kicked Out of Park Days After Tens of Thousands Attend Protest
The dripping hypocrisy and double standard is simply sickening. YWN
Hasidic children were once again tossed out of a playground. It happened on Monday afternoon at the park located at Lee Avenue near Division Avenue. Meanwhile, just a few days ago, NYC Mayor DeBlasio (who was not wearing mask) joined tens of thousands at a protest in Brooklyn at Cadman Plaza to protest the horrific murder of George Floyd.
Once again, it’s a tale of two cities. 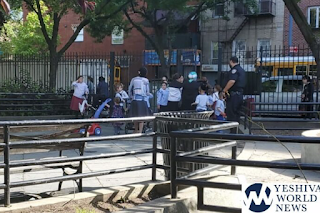 And, yet people actually voted for him. It is said that people get the leaders they deserve; trouble is what about the good and decent people who don't deserve these leaders. Troublesome times, r'l.