MATZIEVOS of HaRav Levi Yitzchok of Berditchev and 3 Sons FOUND

In an incredible find, the actual Matzievos Of HaRav Levi Yitzchok of Barditchev and his three sons were uncovered during construction work on the gravesite that took place during the months of March and April when COVID-19 was hitting hardest. YWN

this is amazing, and wondering about the timing.
Levi Yitzchok was a tremendous fighter for Yidden The Kevarim were unearthed from below the original Ohel where they had been for around 120 years until the Holocaust – from the time they were buried.

The Chabad Rabbi of the city, Rabbi Moshe Teller together with head Shaliach to western Ukraine Rabbi Shlomo Willhelm visited the Kevarim and explained what transpired. The work was initiated by Rabbi Teller, who decided to redo the gravesite and renew part of the Jewish cemetery in the city. 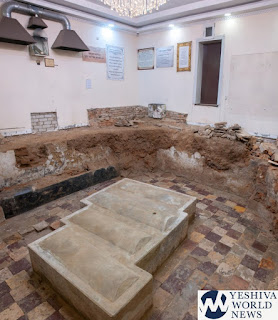 Rabbi Teller decided to remove the floor so as to install underground heating in the site. When the cement was removed, the original Kevarim were discovered – some distance from what has mistakenly been thought to be the actual location of the Kevrim.

Following this revelation, it seems that people were Davening in the wrong location, and have may actually been standing on top of the Kevarim while Davening.

At first, the building itself was unearthed and then the dirt and rubble inside the building were removed revealing the four Kevarim that are attached one to another. The revealing of the location of the actual grave of Rabbi Levy Yitzchak is a joyous occasion, as now Jews from all over the world can head there to pray, and will finally be praying in the correct location.

Yahrzeit Of Reb Levi Yitzchok Of Berditchev In Berditchev, Ukraine 2017