They are being organized and fashioned after the “N” Brown Shirts. Make no mistake about that!
This is how it started in “G”.


RIOTING AND LOOTING BY ANARCHISTS:  SEDITION AND TREASON IS PERFECTLY OK, BUT CHILDREN IN A CEMENT FAUX PARK IS ‘VERBOTEN'!?!


HYPOCRITE: DeBlasio “Explains” Why Kids Kicked Out of Parks, while
And Thousands Can Protest Rampaged and Protested
(where were the ‘masks’ and ’social distancing’)

Question:
Good morning, Mr. Mayor,You’ve been discussing equality a lot, and I’d like to ask you about another apparent inequality in the city.

During the past week, on multiple occasions, NYPD officers have expelled mothers and children from playgrounds in Brooklyn, while just a few blocks away on the same day, there were protests with hundreds of people.

How does it promote equality, Mr. Mayor, when protestors, who have already had nearly two weeks to be out in the street, are continually allowed to gather, while families – many are large families living in very small apartments, who have been shut in for months, and want to enjoy a hot summer day, are being expelled?

Answer:
Look, Reuvain, I appreciate the question. And this has been such a complex reality.

I think, again, several have asked this question, I do think the moment that this city, this nation has gone through in the last two weeks or so is something very particular, very painful, very intense, very challenging, but also a moment where literally decades and centuries of the demand for change came forward, and real change is happening as a result. And I don’t for a moment, Reuvain, I don’t lack compassion for those parents – I know it must be extraordinarily tough. I know parents are so frustrated. Look, for Chirlane and I with two kids, we often felt really challenged, even when we weren’t cooped up in a pandemic. So a family with four kids, six kids, seven kids, eight kids, nine kids, ten kids, I can only imagine how tough that is for the parents, and I want nothing more than to get them back to those playgrounds. It was one of the areas where I really tried my best to keep the playgrounds open. And if it hadn’t been for the growth of the pandemic we would have. But we had to at the time – this is something we worked on with the state – we had to get to the point of saying, look, out of an abundance of caution, the playgrounds just created too much of a risk to families, of the spread of the disease.

The day is coming – it’s not here yet – but the day is coming when we’ll be able to open up them again. We don’t have a timeline yet, it will be absolutely connected to how we do at fighting back the disease. I’ll have more to say on that when the right time comes. But I hope I have given you some sense of why I think the demonstrations were something absolutely unexpected, absolutely particular. But the ongoing effort to try and relieve the pressure of these families while still protecting against the resurgence of the disease – and this is the punchline, this is what matters, Reuvain: The last thing you want, or anyone wants, is a resurgence of this disease that then will lead to the restrictions being once again put back in place. We’re finally in Phase 1, a lot of those small-business owners that your publication and others have raised the concerns of, are finally starting to get back to work. They are a few weeks away from getting back to normal work, for example in retail stores. We have to hold the line as painful as it is, to not allow the spread of this disease so we can get back to that. 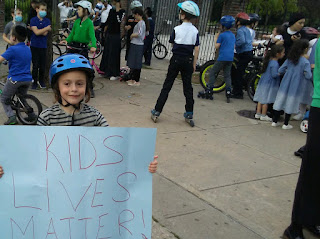 Dozens of children showed up at 18th Avenue Park with their bikes, scooters and rollerblades protesting the continued closure of city playgrounds. The children were seen outside the closed park on Thursday evening with posters reading kids lives matter.

Governor Cuomo said the state is allowing localities to reopen playgrounds with guidelines as of Thursday. No decision on reopening has been announced by NYC Mayor de Blasio. 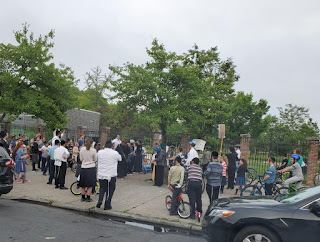 It's so obvious and doesn't take a rocket scientist to figure out how there's been a global takeover. If the President doesn't put a stop to all this very soon, one has to wonder.... Praying for biat Moshiach tzdkeinu!