Dr. Ellie Carmody, of the shady front organization JOWMA, has been a fierce proponent of vaccines. In a letter to Mishpacha Magazine in 2019, in protest of an article that raised religious and health concerns about mandating the HPV vaccine for Orthodox Jewish children, Dr. Carmody wrote that "the proposed mandate for HPV vaccination is a public health measure and not a religious issue particular to the Orthodox community. Like mandated child car seats and house lead inspections, it is simply about the safety of our children in a world that we cannot predict".

This was merely a warm-up for the Covid shots, which JOWMA relentlessly pushed with advertising in Orthodox Jewish media, community events, and culturally tailored propaganda. Carmody played a prominent role in this propaganda campaign. She served as a board member of JOWMA's Covid-19 “task force” (all mention of which has since been scrubbed from their site, though their archived material can still be found at https://web.archive.org/web/20211229160447/https://jowma.org/covid19.)

Also missing from their website is the below guidance they once posted for children under 12, claiming 91% vaccine efficacy and no life threatening side effects.

[me: I made this chart xtra large so it can be read] 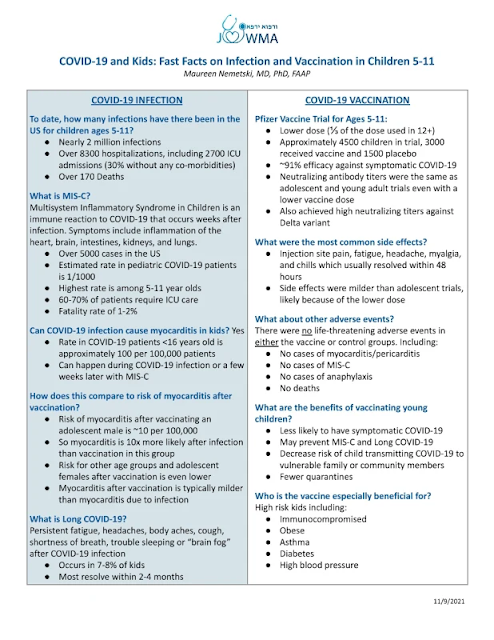 In one interview on the popular Nachum Segal radio program (one of nine separate interviews Segal conducted with JOWMA/PHARMA operatives), Carmody and Segal mocked the crazy notion that the Covid shots could cause serious reactions. The interview is still available here.

And here is a promotional video of Carmody and other JOWMA operatives, all using their orthodox appearances to push the shots on their community.

In light of this, a recently obtained recording of Dr. Carmody is downright explosive. In a conference call with Dr. Jane Zucker, Assistant Commissioner, NYC Department of Health and Mental Hygiene, Carmody expressed serious concerns about her ability to continue pushing the Covid shots on 5-year-olds.

She acknowledged the fact that people with prior infection (natural immunity) were at very low risk of serious illness, and that the Covid shots were proven to be “less effective” against the so-called “Omicron variant”.

Carmody, visibly rattled, then said the following: “Yet we're really asking people with prior Covid to vaccinate their kids. It's really challenging, and I don't have answers, and I don't know if it's – if I have that lack of confidence in my own pitch, then I don't know what to do as a provider.”

One of the most outspoken vaccine-pushers in the Jewish world, who had mocked and defamed those who had doubts about vaccines in general and the Covid shots in particular, was now confiding to a superior that she herself lacked confidence in her own sales pitch!

Was this a small flicker of conscience emerging from the depths of Ellie Carmody? A pang of guilt? A tiny slice of soul that had not yet been sold to the devil?

Of course not. Carmody was not at all concerned about the ramifications of pushing shots on children that provided dubious benefits at best, with all the needless risks and unknowns involved. She had no intention of informing the parents who trusted her “expertise” and Jewish appearance that the Covid shots were far less beneficial, advisable, or necessary than she had previously claimed. That was not for public consumption.

“What would help you?” asked Dr. Zucker. In other words, how can I help you continue pushing Covid shots on children, even though your belief in the shots is badly shaken?

Carmody was searching for something, some morsel of data, that she could use to sell the shots to children. Maybe there is a decrease in the risk of hospitalization for children who were infected and later took the shots?

“I don't know that,” admitted Zucker in a fumbling reply. “I can't say that. You know, what I can say is that I wouldn't be worried about the safety of the vaccine in those kids...and we're going to see a boost in the immune response based on everything we know, from vaccination, in terms of having increased protection. That we know. Like, there's some things we know, there's some things we don't know.”

In other words, just tell parents that the shots are safe and they will add protection to children – even though the former is entirely speculative, the latter is something they no longer believed based on the data, and there was so much they still didn't know.

Doctors who care about the health and lives of their patients would be loath to advise medical treatments under such circumstances. But for these people, the “doctor” part is a front, a side gig at best. Their main job is manipulating people to take the shots – whatever it takes.

What are you going to do about it?

We're far from done.  More on the way.

chananyaweissman.com/
rumble.com/c/c-782463
Download Tovim Ha-Shenayim as a PDF for free!
If you received this from someone else and want to receive future articles directly, please send a request to endthemadness@gmail.com.
at August 17, 2022

Is there a wonder why Chazal tell us about 'rofim' and their place in Gehinom?

Dear friends, It’s here!!!!! Yom Kippur is the best day of the year; it cleanses and leaves you with the potential to be the person you al...