“The UN’s bias against Israelhas long undermined peace, by encouraging an illusion that Israel will go away. Israel is not going away. When the world realizes that, then peace becomes possible.” 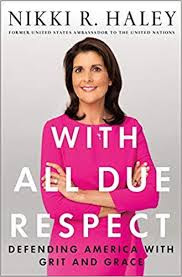 WASHINGTON – Former Secretary of State Rex Tillerson is disputing a claim by Nikki Haley, the former U.S. ambassador to the United Nations, that he sought to subvert President Donald Trump’s agenda in an effort to “save the country."

Tillerson, a former ExxonMobil chief executive, told media outlets on Monday that during his tenure as America’s top diplomat, “at no time did I, nor to my direct knowledge did anyone else serving along with me, take any actions to undermine the president.”

“Once the president made a decision, we at the State Department undertook our best efforts to implement that decision,” Tillerson said, according to The Washington Post, adding that “Ambassador Haley was rarely a participant in my many meetings.”

That denial came after reports emerged that Haley, in her new book, said that Tillerson worked with former White House chief of Staff John Kelly to combat Trump’s decisions and that Haley rebuffed their efforts to join their cause.

“Kelly and Tillerson confided in me that when they resisted the president, they weren’t being insubordinate, they were trying to save the country,” Haley wrote in “With All Due Respect,” which is set to be released on Tuesday.

“It was their decisions, not the president’s, that were in the best interests of America, they said. The president didn’t know what he was doing,” she wrote, according to an advanced copy obtained on Sunday by The Washington Post.

Tillerson went so far as to tell Haley that if he didn’t resist Trump’s decisions “people would die,” Haley wrote.

“To undermine a president is really a very dangerous thing,” she wrote, according to the Associated Press, which also obtained an advanced copy. “And it goes against the Constitution, and it goes against what the American people want. And it was offensive.”dallasnews

So, how does one explain this:

TRUMP:  If Tillerson called me a moron, let's 'compare IQ tests’ dallasnews:
Posted by Neshama at 7:54 AM