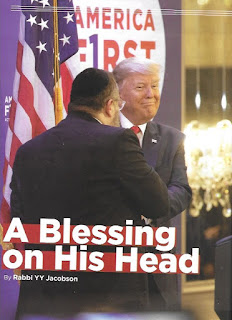 Wow was it that I was given the privilege of introducing President Trump and invoking the brachah for kings and leaders at a luncheon with American Jewish donors?

It all started some two years ago during a Shabbos Hagadol derashah in our shul in Monsey, when I shared with the kehillah how, notwithstanding our many challenges, we are living in extraordinary times. We were given a president who is a staunch friend of Israel and the Jewish people — for which we must thank our Creator and express gratitude to the president.

Never in the past 2,000 years, I said, have the opportunities been greater for us to fulfill the vision we recite thrice daily — “Lesaken olam bemalchus Shakai,” to repair the world under the sovereignty of Hashem. For the first time, we live in a milieu when Jews can serve as moral teachers of mankind, becoming beacons of light, truth, love, and hope. We have the chance to be an outstanding voice in the moral conversations of mankind, and the world is waiting for it.

I spoke of our need to create a paradigm shift in how we perceive Judaism and the Jewish people. Today we can change the world. When a Jew lives an authentic Jewish life, saturated with faith, integrity, yiras Shamayim, ahavas habriyos, joy and love, his or her impact can go viral, and that when you show gratitude to people, they embrace it with enthusiasm.

One man sitting in the audience took the words to heart. He phoned the White House and said that a group of Orthodox Jewish leaders and philanthropists would like to show gratitude to the president of the United States for his dedication to Israel, his resolve against terrorism, and his courage to do what is right even in the face of radical pressure.

This individual, noted askan and baal tzedakah Mr. Leizer Scheiner, was not searching for an “in” to the White House, nor was he seeking business or political networking opportunities. He was inspired by a vision to show hakaras hatov and say “thank you” to a president who deserved it.

And so, two years later, last Tuesday on November 12, 400 Torah observant Jewish philanthropists were gathered at the Barclay Hotel in Manhattan, expressing their appreciation through words and checkbooks.

Mr. Scheiner phoned me a few weeks before and said, “Since you inspired me to do this, I want to ask you to introduce the president.”

Two Meetings
Behind the curtain backstage, I greeted the president, who was flanked by Jared Kushner and yeshivah graduate Avi Berkowitz. As I stood there observing 400 Jews with yarmulkes singing “Ani Maamin” together, my mind traveled back to a very different time, not so long ago, when another 400 Jews with yarmulkes came to meet the president of the United States.

It was October 6, 1943, two days before Yom Kippur. Four hundred rabbis, in their black hats and beards blowing in the wind, marched from the Washington, D.C. railroad station to the White House.

The rabbis knew that two million Jews had already been killed and that millions more would be slaughtered. The knowledge that Hitler was killing the Jews of Europe by industrial extermination was known to the Allies. The rabbis came to plead with President Franklin D. Roosevelt to allow for an immigration increase to the United States and rescue their Jewish brethren from German death camps.

Yet, at the advice of the President’s Jewish aids, who suggested the protest of the rabbis would stir up anti-Semitism, and furthermore claimed that the Orthodox Jewish marchers were not representative of American Jewry, President FDR refused to meet them and left the White House by a rear door.

I couldn’t help but contrast the two scenes, which inspired my introduction to the president as he stood backstage and watched on a monitor. This is what I said:
Some 40 miles from Auschwitz there is a small polish city called Bochnia. In August 1943, the Germans conducted their final aktzia to transport Jews from Bochnia to Auschwitz.

One child, a six-year-old boy by the name of Aryeh Leib Blum, instinctively felt the need to flee. Both his parents had been murdered already, and he knew he had to escape.

Leibele Blum saw a garbage can in the street. He climbed into it, covered it with the lid, and hid in the heap of garbage.

A Gestapo officer, searching for Jews, with heavy boots and barking dogs, thought maybe someone might be hiding in the garbage. He removed the cover, and sure enough, there was a Jewish child there, Leibele Blum.

Leibele stood up in garbage can and removed from his pocket his most prized possession — a lollipop. Feigning a smile from ear to ear he presented it to the Gestapo officer as a gesture of friendship.

This is what our people endured — for millennia.

But despite all odds, we never despaired. We believed with every fiber of our being that the sun will yet rise again, that goodness will prevail. Our mission statement was that verse in Psalms: “Lo amus ki echyeh — I shall not die, but I shall live, and declare the deeds of G-d.”

Thank you, Mr. President, thank you.

Mr. President, G-d has chosen you as the leader of the free world. You are charged to stand as the guardian of the great values first articulated in the Torah 3,400 years ago — to respect the Divine image of every human being, to fight evil, and to build a world dedicated to decency and compassion.

The resistance you experience is only because your leadership is so vital and indispensable.

Thank you for not bending to the venomous rhetoric that for decades went without protest.

In Genesis, G-d promised Abraham: “I will bless those who bless you.” You, Mr. President, have blessed Abraham and his heirs. Your leadership has been a blessing to America, to the Jewish people, to Israel, and to the world.

Which is why G-d has blessed you — and will continue to bless you!

At this historic moment of gratitude, millions of G-d-fearing Jews turn to you and say: Fear not to continue to fight for the good and the just, for G-d is with you.
Posted by Neshama at 5:07 PM