Can A Jew Say Kaddish for a Dead Hamas Terrorist?

Can A Jew Say Kaddish for a Non-Jew?
What if the Non-Jew was an Enemy Terrorist That Wanted to Kill You?

Sefer Chassidim (Rabbi Yehuda haChassid, 12th century Germany) who said that one may pray for the soul of a gentile who saved Jews in times of persecution and crisis. Later authorities expanded this ruling for a ger (convert) to say kaddish for his non Jewish parents. Apparently there is no prohibition of saying kaddish for a non Jew, as the kaddish prayer is always acceptable, but the custom seems to have been limited.

Rav Ovadiah Yosef (Yechaveh Da'at Vol 6 Responsa 60) rules that a ger may say kaddish for his parents and brings a variety of sources. Noteworthy is that the Sefer Chassidim quotes the Yerushalmi (Megila Ch. 3 Par. 7) that one must bless Harbonah who gave suggestion to hang Haman. Yeshiva.co 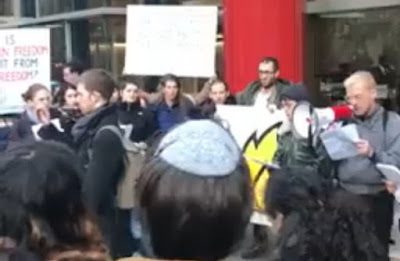 Some comments to this tragic staging:

"Are these really Jews? If so. Do they understand what Kaddish means? If so have they attended a funeral in Israel for Jews killed in terrorist attacks? Do they have relatives who have been killed by terrorists? Do they have lone soldiers like I do in the IDF putting their life on the line to defend the Jewish State? Or is this as I suspect a twisted misguided intellectual exercise and they have no clue what a killul Hashem they are committing?"

"My zayde told me before he dies when I was only 12-years old that the worst anti-semites were the Jewish ones. I couldn't believe it because it was such a contradiction to me, but he said that I'll see it throughout my life...I have!"

"If over 72% of the Jewish electorate can vote twice for the most anti semitic President in US history, and then vote for Hillary Clinton who also is an anti-semite, what do you expect from these New York Left Wing Jews? We are better off with Christians as supporters of the State of Israel then these anti semitic Jews."

“[T]hey remind me of the Jews in Germany who thought they were 'good Germans'"
Posted by Neshama at 5:19 PM

Sometimes I take a double take to see if I'm really reading the insanity and outrageousness that is happening on a daily basis in this world of chaos/lies where up is down and down is up, good is evil and evil is good, c'v. These leftwing 'jews'? are either completely mentally sick or their shoroshim are not of our Patriarchs & Matriarchs.

They not only sin, in general, as they do not adhere to practically anything the Torah dictates for the Jew, but they go out of their way to worsen the situation for klal Yisrael and commit the vile sin of calling 'evil good'.

May the leaders of Reform Judaism be obliterated from the face of the universe!