*Analysis: With Fertility Rising, Israel Is Spared a Demographic Time Bomb
Our fertility rate is much higher than elsewhere in the developed world, and it’s rising 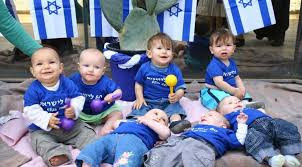 In 2014, the fertility rate among Muslim and Haredi women was 6.9, but it has been dropping overall over the last two decades. For non-Haredi Jewish women, the rate is high compared with their sisters in Europe and North America. For women who define themselves as secular, it was 2.1; 2.6 for traditional women; 3 for traditional-religious women; and 4.2 for Orthodox women. In contrast to the rest of the developed world, the Israeli fertility rate is about the same as it was in the ’60s. And it has been rising in most groups in Israel in recent years.

In one survey conducted in 2012, many Israelis cited the security situation as encouraging more babies, while others cited social norms and the government’s pro-family policies – among other things a rate of fertility treatments that is 13 times the level in the United States on a per-capita basis. Many experts cite the latter as the reason as well.

Another possible explanation is that Israel didn’t suffer the sharp economic downturn that most of the rest of the developed world did after 2008, with this contributing to demographic optimism.
Fore sure, a family’s financial situation is a factor is deciding how many children they have – but not in the way people intuitively think of it.

The 19th-century social theorist Thomas Malthus had predicted that the world’s production of food would be outpaced by the growth of its population, leading to disaster.

In fact, technology enabled harvests to exceed population growth and the decline in fertility that followed in the next century wasn’t due to poverty or want, but people’s improved economic conditions and higher education.

Although environmentalists may be happy with the trend, economically speaking, an aging population and the disappearance of babies do not augur well for nations. [. . .]


Israel is some kind of miracle. On the other hand, though, it means overcrowding, insufficient infrastructure, an uneven distribution of resources and an increase in the proportion of low-wage workers, which significantly offset our advantages.


Planning for the future is the most important thing we need to do.

The first sensible thing Labor has said:
Veteran Labor MK: Annexation the only way to save two-state solution. Responding to criticism over plan to annex settlement blocs, Eitan Cabel tells Times of Israel his party is out of touch with the public it represents.
There’s plenty of space in Judea and Samaria to build Jewish cities.

Thank you for this heads' up. It's good to know we're headed in the right direction on some level.

Eitan Cabel, whose "parents did not emigrate from Yemen to live in a largely Arab country..." is still not quite in touch with reality (and of course Times of Israel isn't either). Ma'ale Adumim and Ariel are "city-settlements"??? No place else would call their dwellings that sort of thing. I agree with a comment on the article you seem to refer to:

Peter Aiello: "Seeking international legitimacy for settlements may be another expression of unreality. Israel will have to determine its own legitimacy according to its own needs."

That would be closer. I hope we will put this foolishness away from us soon! Now, even. Every moment we put it off risks not having anything for Mashiah to rule when he is revealed; may he be revealed now!

Jewish fertility rate is higher than that of the Arab rate, which is about 3.1, not 6.9.

Anon, the Haredi birth rate is 6.9, not the average Israeli.