AGGRESSIVE MISSIONARIES and ASSIMILATION: What Is HaShem Telling Us?

We Just Came to Mt Sinai on Shavuot and Said *Na'asei V'Nishma.
What is HASHEM Telling Us About This Scourge?

Missionaries have invested close to 2 million dollars in a new campaign to trap religious Jews! The missionaries are dressed as “ hareidim" and give out material that looks Jewish and religious - with a kosher phone number. They also have a poster campaign of ‘Komiks' in an ongoing serial. Through these posters, they ask you to respond and then they get your email address, etc., so they can send you their missionary material. 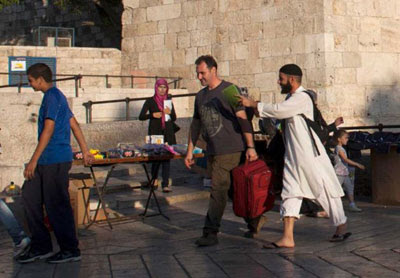 ”The Muslims greeted me with love I never got from my parents, and the women here say, 'You're one of us now,'" she said, giving only her new Arabic first name, Yasmin

**Muslims seek Israeli converts: The bearded men approach Jews in and around the Old City of Jerusalem and try, in polite and fluent Hebrew, to convert them.

"I must tell you about the true faith," said one missionary in a cobblestone plaza outside Jerusalem's Old City. He carried a knapsack full of pamphlets about Islam in several languages, including Hebrew. "You can do with it what you want. But telling you is our duty.” Islamcity

Not only are Israelis, and Judaism threatened by Missionaries, but the State of Israel is threatened. The Assimilation of Israelis into the Non-Jewish minority population causes untold tragedies on Israeli families and their children.


In this Yad L’Achim Video "It was important to us to emphasize the confusion that a Jewish woman who has married a non-Jew feels regarding her identity,” . . .  from "thousands of conversations with women and girls whom we've helped. When they assimilate and get involved in mixed relationships, they always experience a sense that they have lost the Jewish part of themselves."


"We have files of more than 7,000 women and girls in Israel, sometimes with their children, who turned to us for help in the wake of their marriage to a minority member, here in Israel."

Yad L’Achim: "It is important to us to get a public dialogue going on the subject and to sharpen the message among women and girls that they not get themselves into this situation, as well as to the Government of Israel that it should start acting. Because assimilation isn't just taking place in the United States and Europe, it is also HERE IN ISRAEL, in ever-growing numbers.”


Read this: Murder Known in Advance

**At a recent gathering for new Muslims, 55 converts came with their families - five of them native-born Israeli Jews, all of them women, Younis said. One woman, a 20-year-old, converted in June to marry her Muslim husband.
at May 21, 2018

In a few words, this miserable situation is due to the invitation and laxity, in general, by the govt. of Israel to allow these missionaries in and to go on missionizing praising and making them very comfortaable. In the 'Jewish' country, there should be a Law prohibiting any kind of missionizing by non-Jews. The xtians have now infiltrated the Land to such an extent with the power of their money, that it will only be with the help of H', that this situation can be fixed. The Romans were 'invited' into the Land 2000 years ago - need I say more? H' yerachem!