Advocate for Jews Stands Up For The Jewish Chassidic Community in This Vaccine War
An exceptional source of amazing information. Comparison to WWII Germany is alarming. If this video has been “censored” try to find it on a smaller media.
[https://youtu.be/GmFX-iQA2nA OR go to The HighWire with Del Bigtree and search for the video] 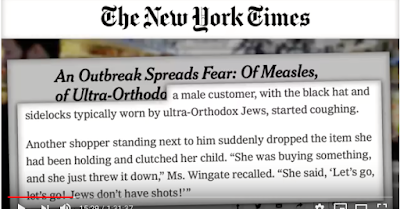 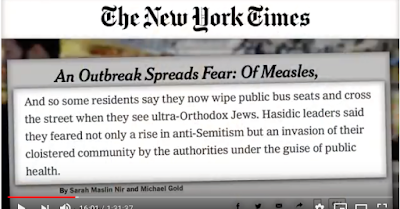 An Interview with a Chassidic Jewish Woman who read from Maimonides in the video:

The take-home bottom line in all this is that the Jewish Community is being manipulated, threatened, and persecuted. Sound familiar?
Yes, it is now here in America, and the NYT has joined the aggression.
BTW the ‘island’ of Australia is most aggressive in their vaccine war against parents and doctors. Do you understand that? Against parents and doctors! (learn about it, visit www.tayswaymovement.com.au)

What is most disturbing about this entire forced attack on Orthodox Jews is the sad state of confusion; among the so-called religious medical members, creating the manipulation and scare to the Gedolim, who rely on their so-called expertise, who then issue unnecessary recommendations. Its just plain awful what has happened. The manipulation of the centre for ….. to inflict such madness on  inadequately informed innocent human beings. Prediction: this will be the beginning of the end for the evil ones in the medical profession, and the end of disastrous years of allopathic philosophic approach to healing. Something better has to come about from this disaster.

Excellent post. Hope many will get to see these two vital and informative videos.
People on their own tend not think and rely on what they hear, so this information is vital for them to see for their own good. As the famous Chinese saying goes, pray not to live in 'interesting times'. H' protect us all!

As of November 30, 2018, there have been more than 93,179 reports of measles vaccine reactions, hospitalizations, injuries and deaths following measles vaccinations made to the federal Vaccine Adverse Events Reporting System (VAERS), including 459 related deaths, 6,936 hospitalizations, and 1,748 related disabilities. Over 50% of those adverse events occurred in children three years old and under. However, the numbers of vaccine-related injuries and deaths reported to VAERS may not reflect the true number of serious health problems that occur develop after MMR vaccination.

I’m a Jewish orthodox pediatrician BH 30 years of experience. I understand what the respected Rabi is saying, but epidemics don’t respect frontiers. In 1988 there was measels epidemic, I was working in a big pediatric hospital in my country of origin. Measels is very contagious, I so children died of complications. We don’t have viruela (small pocks) in the planet thank you to vaccinations, Polio was common and terrible last century, today is almost absent from the planet. We pediatricians worldwide use to see meningitis and pneumonia rotavirus and tuberculosis in a regular basis, with terrible complications, and sometimes dead. Thanks Hashem to vaccines, It is rare to see this diseases anymore. This is not statistics, this is life experience. I don’t think psak Halaja is not to vaccine children, even in 21 century or even in the United States.
That big pharma make a lot of money that’s other story. I think the Rambam zl will also say yes, in general terms, to vaccines in the world we live today. Besides most of the vaccines we have today are in a big part because Jewish mind.

You say doctors scare the gedolim! We orthodox doctors, also have emu at jajamim, and belive in dat Torah, over everything else. Gedolim don’t get scare because of doctors.
I really like your blog, but in this issue, I know there is very much misinformation.

Dear dsbrd what you are saying is WHAT WAS in the early days of the vaccines. It is the era we are in NOW that that so-called agency created to protect children is NOW killing them. Also, they are using their vaccine weapon to scare and inject as many as possible to injure their immune system so they will NOT BE ABLE to fight off real disease. The vaccines reduce the G-d given ability of our immune systems to fight off all but the extreme (man made viruses) that can kill a person. The industry has gone from a handful of injections to over 25, which includes HUGE amounts of aluminium that contributes (if not causes) AUTISM. This has been proven SCIENTIFICALLY. Just search, research, and find out for yourself about these statements. You are being fed mis-information and I believe you are just misguided about the dangers of how they have evolved into a weapon of the evil ones in the world.

I don’t think I meant scared as much as mis-guided by the religious MDs who are also being fed misinformation, and these MDs do not really research what they are doing; they believe in the “so-called authorities” when they should be questioning all the INJURED AND NO LONG WITH US CHILDREN WHO HAVE RECEIVED THEIR TOXIC VACCINES. It is pure logic and Emes of the Torah. The ‘agency’ responsible has done a disservice to the world by covering up with lies and faulty data. These MDs are really not doing their job of SAVING LIVES when they do not follow up on the injured and dead children who they have injected. They are SCARED of being ‘barred’ from practicing and losing $$$. It will all come out eventually about this fraud.

REMEMBER I AM NOT SPEAKING ABOUT THE EARLY DAYS OF VACCINATIONS. They were still rather mild then. In fact, before 1963 when there were nominal cases in the US, the vaccine industry began thereafter their forced vaccinations, and the outbreaks have been exacerbated since then. Yes there were times of relative low cases.

NATURAL IMMUNIZATION from contacting mild childhood diseases (which G-D built into the human ecosystem) give LIFETIME IMMUNITY. Vaccines do not give lifetime immunity, and one needs to re-vaccinate every so many years. This is what causes the epidemics.