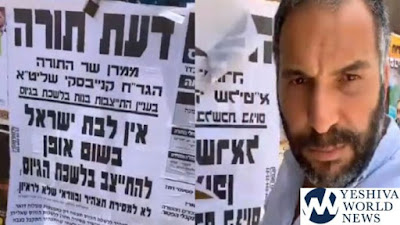 Kobi was elected on his anti-chareidi campaign, not seeking to hide his disdain for the frum tzibur, even daring to announce during his campaign that the chareidim in the city compose 22% of the population, and “they may not be permitted to exceed this number”. He also spreads his venomous lies, insisting the chareidim do not pay arnona property tax, hoping to incite the city’s population against this tzibur.

Tiveria City Hall is located adjacent to the chareidi neighborhood, and the notices in question were posted near Beit Knesset Ohr Torah of HaGaon HaRav David Auerbach. The mayor was fuming when he saw the pashkavilim and tore them down. Reports quoting him state that Kobi was saying “they only know how to take and take and take”.

He also is added saying, “It appears this will only stop when they receive summonses”, calling the hanging of the pashkavilim “chutzpah”.


AND IF THAT'S NOT ENOUGH

Mayor Ron Kobi says public transportation on Shabbat is part of a new initiative to serve secular residents and ‘prevent the Haredization’ of city. The initiative was launched by the city’s mayor, Ron Kobi, in cooperation with Noa Tnua, an organization that promotes public transportation on Shabbat in cities across the country. The new line will be free of cost. timesofisrael

Members of the opposition, the chareidi and religious parties, have done it again in Tiveria. Once again, Mayor Ron Kobi tried to have his city council pass a budget, but it was defeated on Tuesday night in a 9-to-6 vote. It is added that chareidi councilman, Michael Lehrer, who recently joined the city coalition, was among those voting against the budget. Only Kobi and members of his party voted for the budget. YWN
Posted by Neshama at 12:29 PM

B'H, that there is opposition to this madman. How can such an apikorus be voted in, especially in a holy city such as Teverya. He must be voted out once and for all. What a disgrace to the Jewish people. The opposition must consistently vote against everything, no matter what, he and his ilk propose.
Much evil going on in today's world, r'l.