As Rabbi Kessin, in his recent video, "Anti-Semites in Congress, Bombings in Israel, Notre Dame and the Dying Satan” (https://youtu.be/BKw--FcfA2Y) we are seeing the Rabbi’s words play out in front of our eyes. The entrenchment and brazenness of anti-semites in the American Government is startling. American Jews need to recognise this and not wait for untold disasters to strike. Diplomacy did not work in WWII politics, and it will not work in 2019 America, despite the number of politicians supporting the rights of Jews to live. Everyone is responsible for their own actions, as Shamayim plays out our last remaining days on Earth (until the year 6000), but when there is an option to protect your life, I believe one is incumbent to seize it. Another voice in support of this is Rabbi Richter - Poway Attack: The Problem, The Solution You Will Hear Nowhere Else Part I, and Part II this week (https://youtu.be/_7wOnoIvKg4). There can never be enough warnings.


According to Tlaib, It’s As If The Palestinian Mufti of Jerusalem Was Negotiating With Hitler the (sic) Resettlement of WWII Jews to Jerusalem

theYeshivaWorld : After Rep. Rashida Tlaib’s remarks on how she felt “comforted” about her Palestinian ancestors’ role during and after the Holocaust set off a firestorm (as expected), Dov Hikind put out a video to correct her distortions. [what ancestors? neighbouring states’ Arabs were occupiers/squatters] 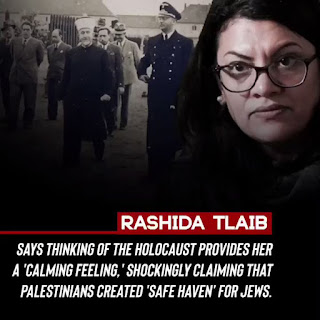 "Dov Hikind:  Antisemites like @rashidatlaib have a long track record of distorting Jewish history just as the Nazis did - but only Rashida lies, gets called out, and then blames her critics for her lies! I’m glad we all saw right through her, but she’s still in Congress!"

Without warning prior, or notice thereafter, Hikind woke up today to discover that Facebook had removed the video (see it on Twitter).

It’s outrageous to think that for a video that did nothing but directly quote Rashida Tlaib along with the famous video of Hitler Y”MS meeting with the Palestinian Mufti as they discussed their ‘shared problem of the Jews’, Facebook censored Hikind and shut down his right to free speech.

It comes as no surprise, as we’ve recently seen Facebook and other social media sights de-platform voices that don’t jive with their far-Left outlook and agenda. But this should be unacceptable, particularly as there was no mention of it. It simply disappeared. The interesting thing is that other accounts re-posted Hikind’s video and the video was not (yet) removed.

*The above is not my text but taken from The YeshivaWorld website.
Posted by Neshama at 2:55 PM