UPDATE #4: Do we Want the Rest of Israel to Look like This?

UPDATE 20:05 Rocket death toll rises to four, Ashkelon victim identified
UPDATE 15:39: 3 Israelis Killed in Rockets Barrages
Over 450 rockets launched at Israel ■ School cancelled across south ■ Three Israelis wounded from shrapnel on Sunday ■
UPDATE 14:35: 2 killed, 1 seriously wounded amid barrages of rockets fired at southern Israeli communities. Cabinet currently meeting.
UPDATE ON ROCKET FIRINGS: As of 6 AM, Sunday morning, May 5, 2019:
492 rockets have been launched at Israel from Gaza since the beginning of the latest round of attacks from Gaza.
21 rockets have landed within populated areas.
119 rockets have been intercepted.
1 person has been killed – Moshe Agdi (58) from Ashkelon, a father of 4.
Wounded: 1 serious, 1 moderate, 21 lightly wounded, 62 treated for panic. 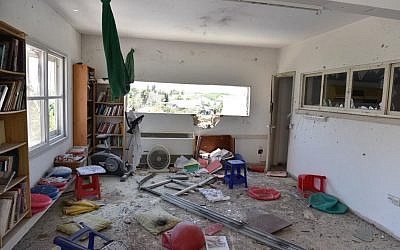 Over 300 rockets have been fired at Israel since Saturday morning. Rockets have fallen in Hof Ashkelon, Ofakim, Kiryat Gat, and Sderot arutzsheva

Moshe Agadi, a 58-year-old Ashkelon resident and father of four, was the man killed on Saturday night after being critically wounded at approximately 2:30 a.m. following a rocket attack which hit a building in the Ashkelon area.

[Two million Israelis voted for Bibi and Gantz, which was a clear statement they will let Hamas continuie to bomb Jews without a response. Everyone knows as long as Hamas exists they will never stop until they are spoken to in the only language they understand. Strength......and strength in the Middle East will keep you alive and weakness will be the end. 1 million who were short sighted and voted Bibi voted for the bombings to continue. You must vote for the real right, Otzma Jewish Home National Union, since Bennett left he weakened the right and until we replace Bibi you must understand he is the worst PM we ever had and his spell over the million is a fraud, he is a traitor who lets Jews perish (fancy word for d i. e)]


After firing 450 rockets in a day, Gaza terror groups threaten to increase range

PA Organizations Threaten to Retaliate for Israeli "aggression" in Gaza The joint operations room of the Palestinian Arab “resistance” organizations on Saturday night issued a statement warning Israel against a "foolish" move in its continued "aggression" in the Gaza Strip. arutzsheva

Hamas creating international ruckus in anticipation of the US “Deal”
How is it that more than a day after this ‘dastardly attack’ began and more than 300 rockets have been fired at civilian targets in Israel the tunnel rats in Gaza still have a “joint operations room” from which to issue any statements?

The bill, known as the Promoting Human Rights for Palestinian Children Living Under Israeli Military Occupation Act, H.R. 2407, would authorize the creation of an annual $19 million fund to support non-governmental organizations that monitor rights abuses pertaining to the Israeli military's alleged detention of children.


“Israel’s system of military juvenile detention is state-sponsored child abuse designed to intimidate and terrorize Palestinian children and their families,” McCollum said in a statement on Wednesday. “It must be condemned, but it is equally outrageous that US tax dollars in the form of military aid to Israel are permitted to sustain what is clearly a gross human rights violation against children.”

The world is once again ganging up on Am Yisrael. In a normal time with normal people leading their nations, this type of insanity would never have been allowed. Israel has the OBLIGATION to literally bomb Gaza which is a literal terrorist entity. Am afraid that it is the unsupreme court of Israel that doesn't allow the normal procedure for war and also appeasing the worldwide enemies of Israel. They would rather Jewish lives be lost, c'v, than the evil lives of our bitter enemies. Woe unto those who go against the commandments of our Torah and do not strike back at these pere adam whose only goal is to destroy the Jewish people, c'v. L'havdil, our greatest King David pursued our enemies and destroyed them and that is what needs to be done now. If not, then we know for sure the inmates are running the asylum.