In Boro Park: “Allah Akbar”
No One in Boro Park is Immune From Attack

"It’s happened. Again. Jews harassed for the horrible crime of being Jewish on the streets of New York City. This time it was two Hasidic thirteen-year olds in Boro Park, near the post office (at 12 avenue and 51 street)," the former Democratic Assemblyman stated,

"They were walking home from the Skolener and Bobover Rebbes’ Tisch early Saturday morning at 1:30am when they were harassed by 4 men in a vehicle (with TLC plates) who yelled “Allah Akbar” sending the two boys away in terror. The car sped up after them, when one of them yelled “Do you know Hitler? We love Hitler!”

The two teens were terrified, and one of the boy’s parents reached out to me right after Shabbos to let me know what happened; I immediately mobilized and accompanied them to the local police (66th) precinct where they have filed a report. The case is being referred to the NYPD’s Bias Unit as the use of a vehicle constituted a physical threat. Read more at arutzsheva 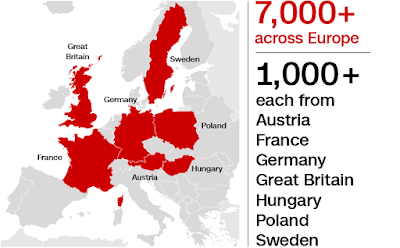 Chief Rabbi Goldschmidt said: "Some populist parties offer appeal to the Jewish communities of Europe; either because the Jewish community feels like it does not like the status quo or because Jews feel that the Party would offer them protection from the dangers posed by Islamic extremism."

"However, once you move away from mainstream parties, the alternative is often far-right parties, some of which have a rotten core of politically correct antisemitism which soon comes to the fore.

"Politically correct anti-Semitism has many faces including attacks on religious practice like religious slaughter and religious circumcision or causing more subtle changes fostering an atmosphere of extremism.

"Going into the European elections, we have to encourage our communities to understand the wider context of this European vote. It is not just a chance to protest against mainstream politics or an opportunity to endorse a fringe position, we need an effective European Parliament that is going to protect minority communities. The Jewish community needs to vote in these elections and we have stressed the importance of this message to our rabbis. Right now, European institutions can do more to protect the Jewish community and this vote is a good way of holding decision makers to account.”

At a gala dinner, Elan S. Carr, United States Special Envoy to Monitor and Combat anti-Semitism, spoke about how " bans on religious slaughter were tantamount to the "forced expulsion" of the Jewish community.”   arutzsheva
Posted by Neshama at 11:13 AM

“If one or more of the parties knows
that peace implies the end of its
existence, it has no motive to return
to peace. That is how the radical Islamists
of Hamas view the future of Muslim society.

A wealthy and successful Jewish state
next to a poor and dysfunctional
Palestinian state may imply the end
of the moral authority of Islam,
and some Palestinians would rather fight
to the death than embrace such an outcome.

Rather than consign their children
to the Western milieu of personal
freedom and sexual license, radical
Muslims will fight to the death.”

“Europe tends toward pacifism because
it knows it has nothing to gain from aggression.

Iran tends towards belligerence because
it knows it has nothing to lose.”

“[Swiss Muslim Tariq] Ramadan is the
grandson of Muslim Brotherhood founder
Hassan al-Banna, whom he praised without
mention of al-Banna’s allegiance to
the Nazis during the 1930s and 1940s.”

As Mohamed ElBaradei, the Egyptian
Nobel Peace Prize winner, said after
the January uprising, his country
“is on the list of failed states,”
and the Arab world is “a collection
of failed states who add nothing
to humanity or science”…

Orna, your link said moshiach is Eliezer ben Etia. Who is that? Did I miss something??!!

Ah, I see he means Rav Berland. He's talking about moshiach but never said he is him.

Miriam, you can google the name Eliezer ben Attia, and you will find out who it is. However, because it is being said and printed online, I doubt that it is possible, because I believe that one is not supposed to say this before Eliyahu comes to declare who Mashiach is, and he is declared so by the Rabbanim. Be careful.

Neshama, I have always heard: Those who know don't say and those who say don't know. I am not sure this disqualifies him, but we just don't know. May Eliyahu HaNavi come and make the announcement today!

Orna, there are still tzaddikim outside of Eretz Yisroel. When Eliyahu HaNavi comes, it will be much easier for these tzaddikim to get their communities home.