“Israel Doesn’t Care About Me” 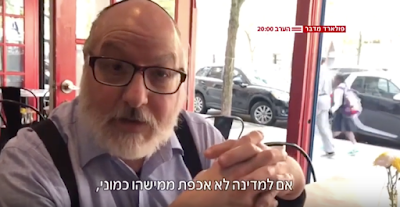 [screenshot from arutzsheva and YWN]

Former Israeli spy, who is still confined to U.S. soil, gave a rare interview on Tuesday in which he accused the Israeli government of not caring about him or his fate. He specifically accused Prime Minister Binyamin Netanyahu claiming that the Prime Minister has made many other things a priority in negotiations with the U.S. and that Netanyahu passed up numerous opportunities to bring him home.

Pollard held the impromptu interview in a New York restaurant that was later broadcast on Channel 12. “To be disappointed, you have to expect more. My expectation level is so low that I am not surprised. The government’s indifference to get us [he and his wife, Esther] home would be crushing if I didn’t know that our faith in Hashem and love of the land is so strong that it will eventually see us home.”

The interviewer pointedly asked Pollard if he thought that Netanyahu had done enough to try to bring him home. Pollard responded by explaining that there were already numerous occasions since his release from prison when the prime minister could have raised his fate with US President Donald Trump but chose different priorities.

There always seems to be something else,” he said. Pollard spoke of the recent successes in Israeli-U.S. relations such as moving the US embassy to Jerusalem, breaking the Iran deal, and recognizing Israeli control over the Golan Heights, as taking priority over his own situation.

“To make it a priority would mean the government cared enough to say it’s time for me to come home in a forthright manner and this hasn’t been done. There is a concern as to what this suggests about its commitment to security. If you don’t care about someone like myself, who spent 30 years in prison on behalf of the land and people of Israel, then how much concern can you actually show or exhibit or feel towards anybody in the country, from our soldiers to our civilians?”


“I’m still fighting to get home, and with God’s help we will get home.”

Making an official response to the accusations aimed at him during the interview, the Prime Minister’s office responded by saying that Netanyahu remains committed to bringing the Pollards back home and that the Prime Minister raised the issue many times so far. They added that Netanyahu plans to continue to raise the topic in future meetings with President Trump.

As part of Pollard’s parole, which he began on November 20th, 2015, he cannot come to Israel at all, nor can he leave his NY apartment during the nighttime hours between 7:00 p.m. and 7:00 a.m. He must also wear an electronic tracking device at all times. The last condition of his parole is that any computer use must be monitored by U.S. government software.