UPDATED Insanity! What Are You Doing to an Autistic Teenager?

POLICE: We didn’t know he was autistic!¥^§??
[but it was ok to beat up a Haredi youth? Details should be obtained before ruffing up someone; like, name, I’d number, and, statement of what happened. Rules of engagement need to be adjusted/revised!]
Police accused of using excessive force on ultra-Orthodox teen with autism 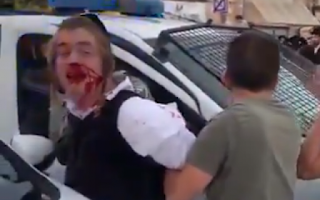 To TOI staff: why are you calling him “ultra-orthodox”??
Are you smearing him? He’s just plain G-d fearing!
More than the police who are acting like goons here!


This should be the headline:
Crazed Officers Beat Up Autistic Teen!

The Israel Police put out a statement Thursday morning defending officers’ conduct after footage emerged of policemen using force against an ultra-Orthodox teenager with autism the previous day.

The incident began when police came to the Mekor Baruch neighborhood of Jerusalem to prevent a group of youths from starting a bonfire celebrating the Jewish festival of Lag B’Omer in a location deemed dangerous, Hebrew-language media reported.

In the footage, officers can be seen restraining the boy with force on the sidewalk, with his face bloodied. They then get him on his feet and pull him toward a police vehicle while protesters explain that he “suffers from problems” and try to get to him, but more policemen and policewomen block their way.

The teenager — who learns at Seeach Sod, a Haredi special education school — can be seen, clearly in distress and pain, repeatedly shouting:

He was released later, but journalists and politicians lambasted police over the incident, calling for the officers involved to be punished or discharged.

“It is heartbreaking to think about this special teenager and what he has gone through,” said MK Meir Porush of the Haredi party United Torah Judaism. “Watching footage of the grave violence he suffered is intolerable and the hate and inhumanity displayed by the officers is impossible to understand.”

Lawmakers from the left-wing Meretz party also called on authorities to thoroughly investigate the incident.

That’s not the only insanity:

It appears Netanyahu is going to dump some of the members of his coalition. Don’t think this will go over well with many of the others. I wonder who they might be?
Posted by Neshama at 3:56 PM

Believe these police are not of Jewish origin. Are they Arabs or mercenaries? Seems like it because if they are jews? then they surely do not stem from our forefathers. How does a police force in the 'democratic Jewish state' behave this way. If the PM is so determined that it be called the "Jewish" state then why does it NOT act like one? This goes against everything Jewish = Torah, Halacha, Mesora, and our total heritage. This must be investigated and anyone, from top to bottom, who has a problem in their behavior towards fellow Jews must be fired and those who are already guilty, arrested fired and fined. That is the 'Jewish' way!

Bs''d
Anonymus, you are right!

Between the vile police and the unsupreme court, we have two signs of dictatorship.
The people need to wake up and keep on protesting against them until both fall back in line if the state wants to be called a 'democracy'. Their behaviors are neither democratic nor Jewish, for sure.