There was something awesome in the sky just now. My daughter, who watches sunsets daily with me, saw it with me. The sun was still above the horizon, about 15 minutes before sunset. 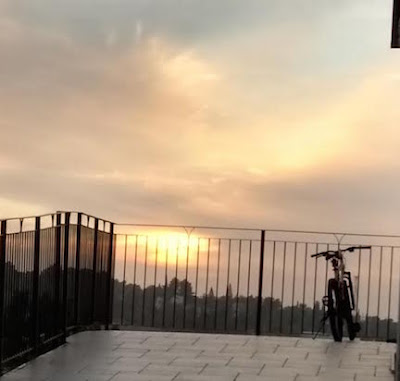 Far to the right, my estimate would be at least 30 degrees away, without other obvious continuation of the almost sunset was another smaller light source behind the clouds and coming out looking like another sunset. It wasn't like another round sun as it was like a squished diamond shape and it was a rainbow colored as well and poking through the clouds. I've seen rainbow arc clouds before and this was way bigger, rounder and very different as there was a super pronounced light behind it. Not a sun dog either which I've seen pictures of.

This sky was still light with no pinks at all and you couldn't even see that it was sunset unless looking at that particular spot. As I was driving, I peeked in the direction of the sunset and saw the sun going lower. Then I turned the corner and said "What's that???" My daughter looked and said WOW.  It looked like a similar sunset but it was far to the right.

I never saw rainbow colors in the sky like that before at all. The light source behind wasn't shining brightly and the rainbow colors were easily visible.

This picture is a oval outlined cloud just smack above and right to the sunset which almost wasn't a sunset. 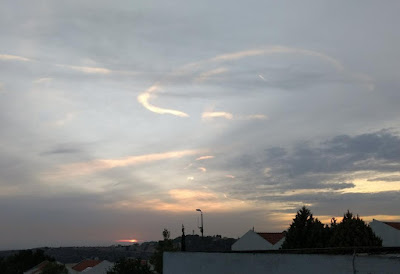 The heavy cloud cover at the horizon, almost totally eclipsed the sunset save a small slit between the clouds that allowed for the hot pink color to come through only 5 minutes before the sun disappeared.

The cloud I photographed didn't seem like chem trailing at all but was super weird looking and lasted a while, at least for the 20 minutes I was watching. 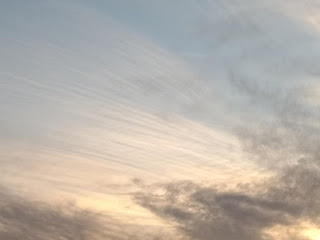 It was chem-trails. I wachted the 6 planes spraying...