Chanukah Miketz – LIGHT CARVED FROM UNDER THE THRONE OF GLORY

LIGHT CARVED FROM UNDER THE THRONE OF GLORY
By Roy S. Neuberger 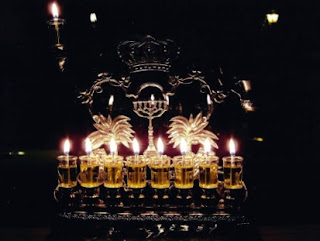 Chanukah is about light.

“At the root of the (Biblical commandment to light the Menorah) lies the fact that the Eternal Lord, may He be blessed, commanded us that a lamp should burn in the Sanctuary, to magnify the glory and splendor of the Temple in the eyes of those who behold it. For such is the way of people, to attain distinction in their houses with burning lights. And the entire reason for the magnification [of splendor] is that that a man’s heart should become infused, when he sees it, with reverent awe and humility. (Sefer Hachinuch, Mitzvah 98)

And then there is darkness.

“And the earth was ‘tohu’ and ‘vohu,’ with darkness upon the surface of the deep….” (Beraishis 1:2) “Here [the Torah] alludes to what happened [after man was created], due to [our] sins… [The word] ‘darkness’ [refers] to the Yetzer Hara … [which took hold of the body.]

“When the Holy One, Blessed is He, saw this, [He] said ‘Let there be light,’ [which means that] He sends man an assistant [to fight] against his yetzer [hara]. This happens when [a man] reaches [his] fourteenth year [i.e. Bar Mitzvah, at which time a new] spirit from G-d … a holy and pure neshomah [the yetzer tov], appears upon him from [Hashem’s] Holy Abode…. [The] light is immense, because it is carved from under the Throne of Glory of [Hashem].

“You should not think [however,] that, since the [elevated] neshomah is within man, or through engaging in Torah [study] … one becomes safe from the trickery of the yetzer [hara] … and it … goes away…. [But, no!] There is still darkness in the world…. It is just that, through this [light], man is helped [in his efforts] to wage war against the [yetzer hara]….” (Ohr Hachaim on Beraishis Chapter One)

“Whenever the Torah or the Sages refer to the oil used to light the Menorah, an allusion is intended to the wisdom of the heart and thoughts of the mind. When the Greeks entered the Bais Hamikdosh and defiled the oil, they blemished the thoughts and feelings of the majority of the people of Israel, who began to accept [the concept] that the ‘wisdom of the Greeks’ continued enduring reality. When the Hasmoneans … entered the Sanctuary, they found only one jar that contained pure oil …. However, this was not sufficient to kindle a perpetual lamp within them, for their processes and feelings had been blemished by the ‘wisdom of the Greeks.’ But ‘a miracle occurred and the oil burned for eight days.’ (Shabbos 21b) This miracle of purifying the heart and one’s thought processes is necessary for Israel in every generation, especially when she is subjugated by the nations of the world.” (Book of Our Heritage, Rabbi Eliyahu Kitov)

Chanukah demonstrates that there can be victory in the war between the Yetzer Hatov and the Yetzer Hara. Chanukah falls during the darkest period of the darkest month of the year. It is the quintessential Yom Tov of Golus. It demonstrates forever that, even when we are apparently drowning in the spiritual darkness of the surrounding culture, we should not despair, even though the odds of survival, let alone victory, seem overwhelmingly against us.

“The pure among Israel of that generation – led by the Kohanim of the Hasmonean House – saw Greek culture as the source of impurity in this world, the most despicable form of paganism. All idolatry is abominable, but when man himself becomes a deity and all of his faculties are utilized to serve himself, this is the most despicable form of idolatry…. When people begin to believe in man’s great power, in the beauty of man’s taste and in the reliability of man’s intellect, the damage that can result is limitless. The Hasmoneans saw that the roots of this defilement were taking hold among the people and declared that war against it was a holy battle.” (ibid)

My friends, that was then and this is now. We have to understand that, difficult as that nisayon was, we are now in worse condition! We have no oil at all, not even defiled oil! We have no menorah! We have no Bais Hamikdosh! We are living in a world that has been almost entirely defiled. We are surrounded by terrible darkness. The entire world, with the exception of those few whose lives are illuminated by the flame of Torah, is bowing to the culture of self-worship, which Rabbi Kitov refers to as the “the most despicable form of paganism.”

Every night during Chanukah, we kindle lights. Outside the window, behind the menorah, there is only darkness. The first night, that little flame seems swallowed by the surrounding blackness. Each night, the light grows more intense as we add a flame. On the eighth night the glow becomes exceedingly beautiful.

We cannot be afraid of the darkness. “There was evening and there was morning, one day.” (Beraishis 1:5), on which Ohr Hachaim comments: “At that time, when [the night of exile ends and] the light of morning rises, [ushering in the Redemption], there will be no more darkness and no more night … ‘and the light of the moon will be like the light of the sun.’ (Yeshayah 30:26) That is what [our verse means when] it says, ‘one day.’”

This year, when we light the flames, let us all picture that day. As we say every morning, “May You shine a new light on Tzion, and may we all speedily merit its light!”

Thank you, this was a beautiful Dvar Torah.