PUTTING THE FEAR OF HEAVEN IN YOUR HEART


WHAT DOES 40 INCHES OF RAIN LOOK LIKE IN SOUTH FLORIDA?
[to give one an idea if Hurricane IRMA (which might be more grandiose than Harvey) barrels into Miami, DC, Penna. or Brooklyn NY] 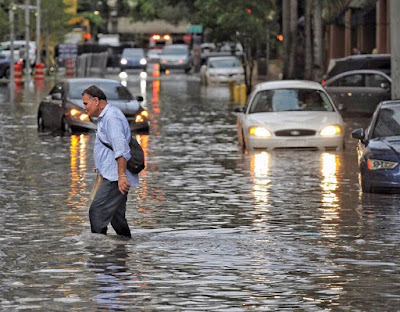 If a hurricane like Harvey landed in Southeast Florida, hammering one of the most densely developed coastlines in all of the U.S. with torrential rain for days, what would it look like?

Widespread flooding, no doubt. Harvey may eventually be classified as a rare thousand-year storm. But exactly how much flooding would result, until now, has largely been a probability analysis based on statistics. Federal Emergency Management Administration maps look at history and stream flows, but not whether a wetland has been paved over by a parking lot, or a new electric pump replaced an old gravity gate on a canal to flush flood water.

“In a lot of places where we only have 40 or 50 years of records, you just have a probability data point,” said U.S. Geological Survey National Flood Hazard Coordinator Robert Holmes. “We really don’t know what a thousand-year rainstorm looks like because we don’t have a thousand years of data.”

But what if, along with historical data from insurance claims, you could look at land use, flood control operations and how quickly rainfall evaporates? What if instead of a statistical model you built a dynamic model based on real-time information?

Omar Abdul-Aziz, an engineer and assistant professor at West Virginia University, has done just that with a new model he built while at Florida International University as part of a state-funded project to improve hurricane loss models. At the request of the Herald, he agreed to run three rainfall scenarios that might resemble Hurricane Harvey.

The maps he produced stretch from Homestead north to Port St. Lucie, not including barrier islands which are separate land masses, and depict flooding after 48 hours from 20 inches of rain, 30 inches of rain, and 40 inches of rain. Because the maps cover a large area, they don’t show flooding at street level. But Abdul-Aziz said they do provide a far more accurate picture of what would happen across the region. 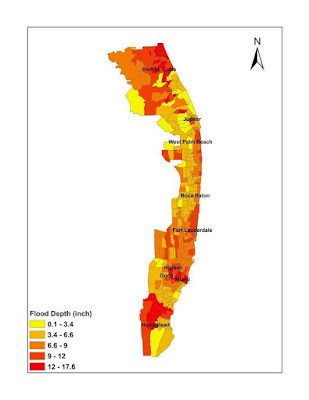 This map, created by engineer Omar Abdul-Aziz based on a computer model he developed to predict flooding from rainfall, depicts how high flood waters would rise if 20 inches of rain fell in South Florida over 48 hours.
Omar I. Abdul-Aziz


At 20 inches, flooding in parts of Miami, Hialeah, South Dade and Fort Lauderdale rises between nine and 17 inches at least. Abdul-Aziz said he took a conservative approach. With 40 inches of rain, flooding in those same neighborhoods, as well as many more, rises to between 23 inches and more than three feet — enough to begin damaging houses and partially submerge cars.

“Because of the flat land and low elevation, water does not move fast. It goes slow and the drainage capacity is not designed to take that much rainfall,” he said.

When asked, the South Florida Water Management District said the agency had never modeled 40 inches of rain. The best estimate they could provide was at 20 inches.

“The criteria this flood-control system is built on is when we have 18 to 20 inches in a short amount of time,” which would bring flood waters to the tops of housing pads in low-lying areas, said spokesman Randy Smith. “That means water very close to your front door.”

With 40 inches over three or four days, “it’s safe to say South Florida would see widespread flooding,” he said.

According to Abdul-Aziz’s model, at 40 inches over two days, flooding would cover nearly all five counties at depths between 10 and 18 inches. 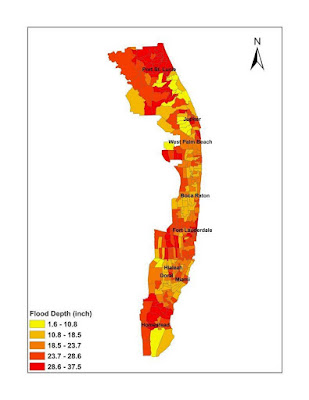 Omar Abdul-Aziz, an engineer and assistant professor at the University of West Virginia, created a computer model to predict rainfall flooding in Florida as part of a state effort to re-assess insurance rates. This map shows how flooding would occur in Southeast Florida during 40 inches of rainfall over 48 hours.
Omar I. Abdul-Aziz


Typically, rainfall from tropical storms and hurricanes is far less because they tend to move. Harvey was unusual in that it sat nearly stationary, and then rain bands trained, dumping water over and over in the same place. Such events in Florida are rare but not unheard of. In 2012, Tropical Storm Debby dropped 28.8 inches in Wakulla County and Melbourne got hit with 27.65 inches by Tropical Storm Fay. Hurricane Georges produced 38.5 inches in the Panhandle and Key West recorded 25 inches during Hurricane Jeanne in 1980, according to National Oceanic and Atmospheric Administration forecaster David Roth.

Parts of South Florida have also wrestled with increasing flooding in the face of sea rise, with Miami Beach in particular seeing a rapid rise.

In advance of storms, water managers in South Florida typically begin lowering water levels in Lake Okeechobee, which they try to keep below 15.5 feet to protect its aging dike, and local canals.

“We know from past history that, generally speaking, one foot of rainfall over the lake's basin could result in a [three to four] foot rise in the lake's water level,” U.S. Army Corps of Engineers spokesman John Campbell said in an email. The dike is at risk of failing at 18.77 feet, he said.
“The dike doesn't have an emergency spillway to lower the water level; the only tool we have to lower the lake level is releasing water over a period of several days or weeks,” he said.

Read full article at the MiamiHerald

Should you ride out a hurricane in a high-rise?

[i viewed this video after writing the above, and was flabbergasted that this is exactly what they are discussing.]

POSSIBILITY OF FLORIDA
September 3, 2017: Any landfall of anywhere of a Category 4 or 5 hurricane is not going to be a good scenario, especially if the area is dealing with sea level rise prior to a landfall and thousands of residents living on the coast in high-rise buildings. The storm is strengthening and lets hope that doesn't happen.

THE WEIRDEST ASPECT IS THAT ACCORDING TO THE MOST RECENT ESTIMATIONS, APPRIZED ON DAILY/HOURLY SCALE,
[which are subject to change IY”H]
LANDFALL COULD BE AT OR NEAR THE POINT OF THE EXIT OF THE ECLIPSE!
****ON SEPT 10/11****
WHOA!
(but again, subject to change)

http://www.miamiherald.com/news/weather/hurricane/article170955607.html
Posted by Neshama at 8:20 PM