ALERT: TROPICAL STORM MARIA – NOW CAT 5 (Like Irma) – JOSE Not Out of Picture

The sea is raging and noisy, waiting for the instructions of the Creator..

BREAKING: Hurricane MARIA a CAT 5 / 160mph - Military Evacuates ahead of Massive Storm
Puerto Rico imposes rationing as Hurricane Maria approaches
The U.S. National Hurricane Center said Maria -- on a path that would take it near many of the islands already wrecked by Hurricane Irma and then on toward Puerto Rico and the Dominican Republic -- is an "extremely dangerous" storm with maximum sustained winds of 160 mph. It was centered about 15 miles east-southeast of Dominica -- or 40 miles east of Martinique -- and heading west-northwest at 9 mph late Monday afternoon.CBS News 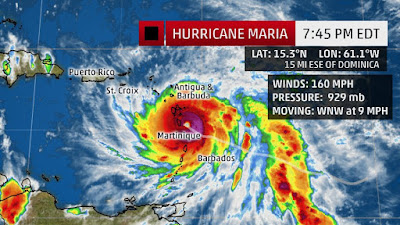 Three powerful storms are churning in the Atlantic, including Hurricane Jose, whose impact will be felt up and down the East Coast, especially New England. Meanwhile, Hurricane Maria threatens Puerto Rico. 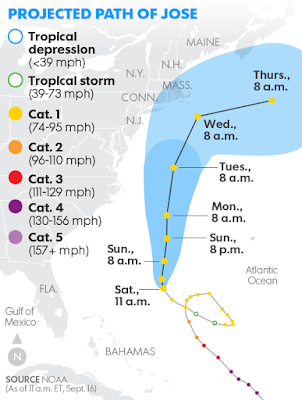 Subject to Change EITHER WAY

As Hurricane Jose ambles northward in the Atlantic far off the East Coast, an innocuous-sounding system has turned into Tropical Storm Maria in the Caribbean and could well follow Irma's destructive path toward Florida as a full-blown hurricane.

At 5 p.m. Saturday, the National Hurricane Center upgraded the one-time disturbance to Tropical Depression Maria and said it was 620 miles east-southeast of the Lesser Antilles, moving west at 20 mph. It was packing maximum sustained winds of 50 mph.

A hurricane watch was issued for Antigua, Barbuda, St. Kitts, Nevis and Montserrat, a route followed by Irma as it moved westward. USAToday 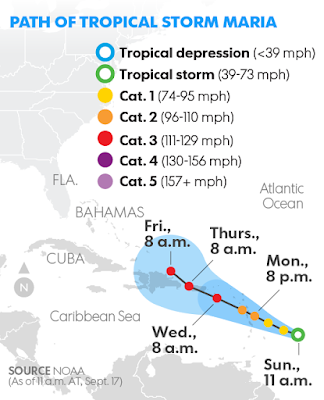 Global Warming .It's time humans rose up and began to do the right thing before it gets out of hand.