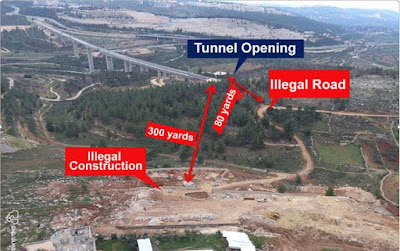 The illegal construction, on the outskirts of Beit Iksa, poses a serious security and safety threat, not only to the massive railroad project, but to the Mevaseret Zion community and to the main roads leading to and from Jerusalem. The illegal structures are being built adjacent to the longest railroad tunnel in Israel, as well as the Arazim Bridge to Route 1, the main artery connecting Jerusalem and Tel Aviv (click for a birds-eye (drone) view of the area).


Constructing Arab Villages as Staging Areas for Attacks on Israelis

Despite the fact that Beit Iksa is located between Jerusalem’s Ramot neighborhood and Mevaseret Zion, it is legally identified as a part of Judea and Samaria, and falls under the jurisdiction of the Civil Administration. Therefore, in April 2017, Regavim alerted the Civil Administration to the illegal construction and to the dangers it poses, to no avail.

Eventually, Regavim submitted a complaint to the Supreme Court, and a temporary injunction to halt construction at the site was issued. The court order confirmed the findings cited in Regavim’s complaint: it is almost inconceivable that an illegal neighborhood could have been allowed to spring up so close to the vital, strategic lines of transportation into the Capital City of Israel — transportation lines in which the Israeli government, and Israeli taxpayers, have invested millions.

The village of Beit Iksa has historically been a hotbed of anti-Israeli and terrorist activity (in fact, it was the first village to publicly fly the Palestinian flag, and boasts a legacy of home-grown terrorists).


“Are these the neighbors we want for the new railroad system, or for the roads leading to Jerusalem?”

The Supreme Court’s temporary injunction is an important statement, the Regavim release said, noting that the injunction continues to be violated and the construction of the “Railroad Neighborhood” continues apace. It is now up to Israel’s law enforcement bodies to take action and to halt this potential disaster before it is too late. The illegal “neighborhood” is taking shape under the very noses of the law enforcement bodies entrusted with our safety.

Regavim’s statement vows it would not allow Israeli authorities to continue to look the other way. “We have already notified the court that its injunction is being violated, and we will continue to monitor the situation,” the movement announced.

*This is insane. Allowing terrorists to build a town/area overlooking the new high-speed rail line from Jerusalem to Tel Aviv is an invitation to disaster. The Government is asleep on this and other vital issues to the Jewish Nation.

Source Article: Jewish Press and Regavim
Posted by Neshama at 9:29 AM

Is there any sanity in anything that they are allowing our enemies to do? Besides fighting this evil (a big yasher koach to Regavim), the main question should be 'why are they allowing this obvious criminality to take place?' This question should be posted all over the city.