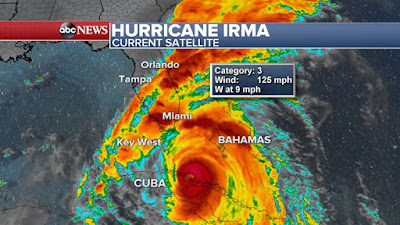 NAPLES, Fla. (AP) — Hurricane Irma’s leading edges whipped palm trees and kicked up the surf as it spun toward Florida with 125 mph winds Saturday on a projected new track that could subject Tampa — not Miami — to the storm’s worst fury. Tampa has not taken a direct hit from a major hurricane in nearly a century.

"Unfortunately, there is no way the United States is going to avoid another catastrophic weather event," Dr. Joel N. Myers, founder, president and chairman of AccuWeather said.

[NOTE: Blogger Dov Bar-Leib said… In order to get out of South Florida (Miami) until Interstate 10 westbound from Jacksonville, one has to drive 345 miles on one half of a tank of gasoline since all the gasoline in South Florida has been sold, and all the gas stations along the way are also sold out of their gasoline. What a horrible plague this is!] 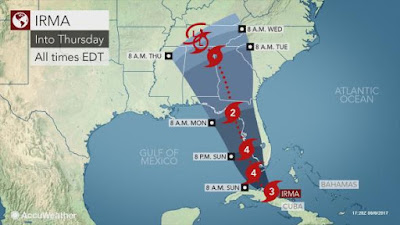 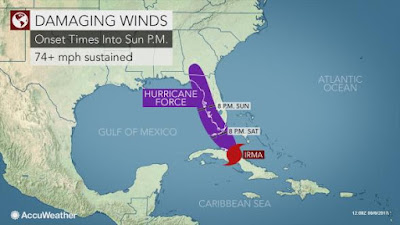 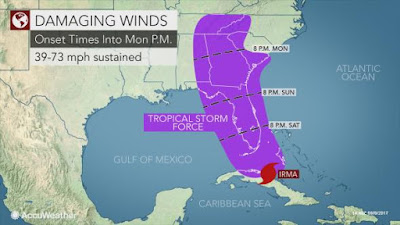 "There will be massive damage in Florida. [It will be] the worst single hurricane to hit Florida since Hurricane Andrew in 1992,” AccuWeather As Irma approaches, fear is in the water,
spreading with new and viral efficiency

MIAMI — Before the storm hit, the fear seeped in, poisonous and sometimes paralyzing.

It flowed from the TV, a nonstop drone of dire warnings and lurid graphics and terrifying images from ravaged islands. It dominated Floridians’ Facebook feeds — telegraphic reports and play-by-play accounts from friends and family who were packing up, hauling out or hunkering down. WashPost

September 9, 2017: IRMA continues to mystify onlookers as it is slowly regaining strength off of the coast of Cuba. Its forward speed has slowed by nearly 50% since yesterday.....not good.

MUST READ: According to CNN, the dramatic mass exodus from South Florida could become one of the largest evacuations in US history.[. . .] Hashem does everything for the best, whether or not we understand how and why. The Gemara says (Tractate Sanhedrin, 37b) that exile atones for all a person's sins. In light of this principle, where a nation doesn't have the will or the sense to repent, rather than being punished more severely, they are exiled. This is exactly what happened to the Jewish People during the destruction and subsequent exile of our First and Second Holy Temples. RabbiLazerBrody

AND MUST READ: Birthpangs of Moshiach and Spiritual Epidural: Maybe you'll believe Isaiah the Prophet. He reprimands those who reject the word of G-d and says, "...it will happen with quick suddenness; Hashem, the Master of Legions, will frequent you with thunder, and with earthquake, and loud sound, storm and tempest, and consuming flame of fire" (Isaiah 29:5-6). In one passage, Isaiah summarizes today's news, including the fires all over West-coast USA, the aftermath of Harvey, Irma, and this morning's colossal 8.1 magnitude earthquake in Mexico, with two more hurricanes brewing out at sea. "Quick suddenness" like the prophet says, events are happening faster than we can write about them. If that's not enough, maybe you'll believe the holy Ariza'l, the father of Kabbalah . . . [go to link to read something amazing]