Moving Toward the East Coast of America
Towering waves predicted near eye of Hurricane Irma! 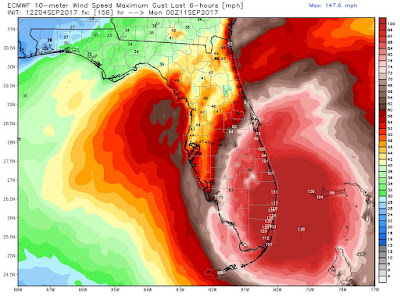 September 4, 2017: The Florida Governor has declared a "State of Emergency" as Hurricane IRMA strengthens to a BIG CAT 4 Hurricane. **This major storm has the potential, according to models right now which are of course subject to change, to make landfall in THREE different states! BIG heads-up. Incredible…

UPDATE 2: VIDEO CAPTURE OF ANOTHER HURRICANE BEHIND IRMA 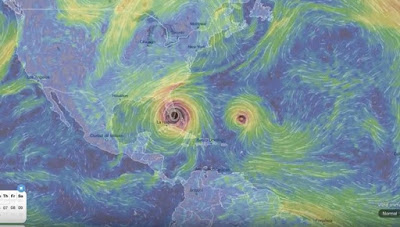 The storm grew in intensity from a Category 3 to a Category 4 Monday as it approached the Caribbean, where it is expected to strike Tuesday.

Even before Gov. Rick Scott declared a state of emergency in all of Florida’s 67 counties about 5 p.m., residents began stocking up on supplies. Spaces on water shelves at several Publix stores were empty. Generators were sold out by mid-afternoon at The Home Depot on Colonial Drive east of Sermoran Boulevard. Full article at Orlando Sentinel


IRMA COULD CHANGE DIRECTION AT ANY TIME 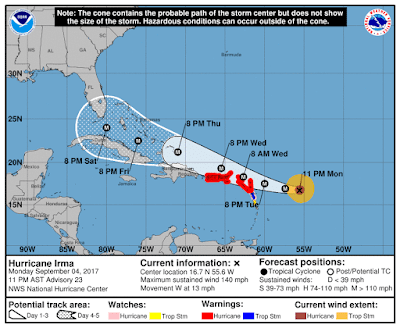 See that gray and black circle at the center of Hurricane Harvey? Do you think you know what it is?
It's more than just the heaviest rainfall. If you recall, Harvey made landfall as a Category 4 hurricane, and was quickly downgraded to Category 2 in about 5 hours. Usually, hurricanes continue on their path inland, and they gradually lose strength and turn into tropical storms, then regular rain.
But what happened here? Harvey began to stall. And then it started gaining strength.

This goes completely against nature.
Posted by Neshama at 8:20 AM